We're getting so much good west coast bass in! Ever since the lineup dropped, we've been blessed with a new crop of talent who have been cutting their teeth on 808's and subs in (relative) obscurity. No longer. We're shining a spotlight on all the up-and-coming g's.

One of those is Tyler Lambiase. Coming out of Colfax, California, the young producer Moldavibe is on the verge of dropping Pour Soul, a wicked new EP on Modern Illusion. We got the scoop on this release, and selected the wildly imaginative Fractalstein remix, which pairs dangerous bass with some darkwave elements. It's a really bottomed-out steam tanker crashing into the pier. Whoo-eee.

It's a double dose of Lambiase on January 26th, because not only is he dropping the new EP, but he's also playing Stilldreamin at Midtown Barfly in Sacramento, California with NastyNasty and a host of others that night. Boo-yah. 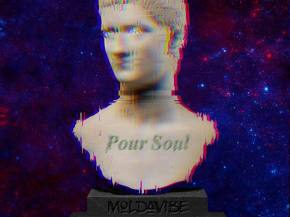