Tucked in a quiet alley of the arts district in downtown Los Angeles is Lot 613, an unassuming warehouse illuminated by hula hoops and hexagons. On June 14th, BurnLA, The Cruz Coalition, The Good Vibe and Roam Creative came together to support the album release of multi-lingual and classically trained performance artist, Maki Hsieh. 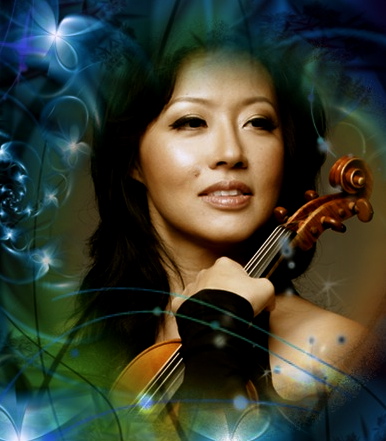 With a background in opera and classical violin, Maki has chosen to build her own musical road, brick by brick. By fusing classical conventions with gut throbbing bass and ethereal electronic melodies, Maki Hsieh has created a musical genesis. Her success is exponential, beginning with her cover of Skrillex’s “Kyoto” a year ago and all leading up to her debut album, Illuminate, which will release with the aid of this fundraiser.

ill-esha, Stephan Jacobs, Electric Dandelion, Loomer and oh-so-many more electrified the stages of this fundraiser. Adorned with twinkling face art and keytar in hand, ill-esha moved and grooved, sending waves of vibrating molecules from corner to corner of the expansive warehouse. Her calculated manipulation of sounds paired with her gossamer vocals, draped us in a cozy, celestial cloak. Stephan Jacobs hit the floor with gobs of bass and glittering treble whilst mermaids and hoopsters wiggled and gyrated on pedestals shaped like giant Rolos. The cool concrete thumped with tingling tremors beneath our feet. The movement of our bodies unified the movement of this counter-culture.

Live artist, Aaron Mostow, created one of a kind pieces using models clothed in blank apparel as his canvas. He designs vibrant colorscapes that fuse the texture of paint with the dimension of clothing design. Though there were many talented visual, sculptural and structural artists present, Dave Zaboski was one of the most luminous and memorable.

Once upon a time, Zaboski was immersed in the imagination of Walt Disney, with apparitions of lions, Greek demi-gods, beauties, beasts and Native Americans dancing through his fingertips and onto the silver screen. It wasn’t until an Indian visionary gave him the key to unlocking his own mind’s galaxy that he began illustrating a new chapter in his life’s tale. Renamed Vishvakarma, meaning Architect of the Universe, we watched as Vishva shaped the paints on his canvas into the striking visage of Maki Hsieh.

Surrounded by geometrical deities, spiritual sounds and scintillating souls, there was much to experience at Maki’s fundraiser. However, it was Maki herself, who was truly the belle of the disco ball. She glided between stages donning a crown of music festival royalty. With wardrobe changes and elaborate face art, she proved herself to be not just a talented musician, but also a dynamic performer. Though this event was spotlighting Maki, she chose to co-perform with each musician, standing beside the stage and freestyling her electric violin to the track that was being played. She created a multi-faceted soundscape that was as calculated as it was organic. Alternating between plucking with her fingers and sliding with her bow, the elegant sounds of her violin were ebbing and flowing in tide with the sounds of whomever was playing. Maki’s performance resonated within everyone present, her charismatic energy pulling people into her sparkling orbit. Maki Hsieh radiates talent, beauty and humility as she happily spent time with her many admirers. Life hold’s no limits for the hearts of the ambitious.

This event was not only a success in funding her debut album Illuminate, but it was yet another testament to the power of movement. The physical movement of bodies, the structural movement of music, and the social movement of the counter-culture. When we move together, even the world moves with us.