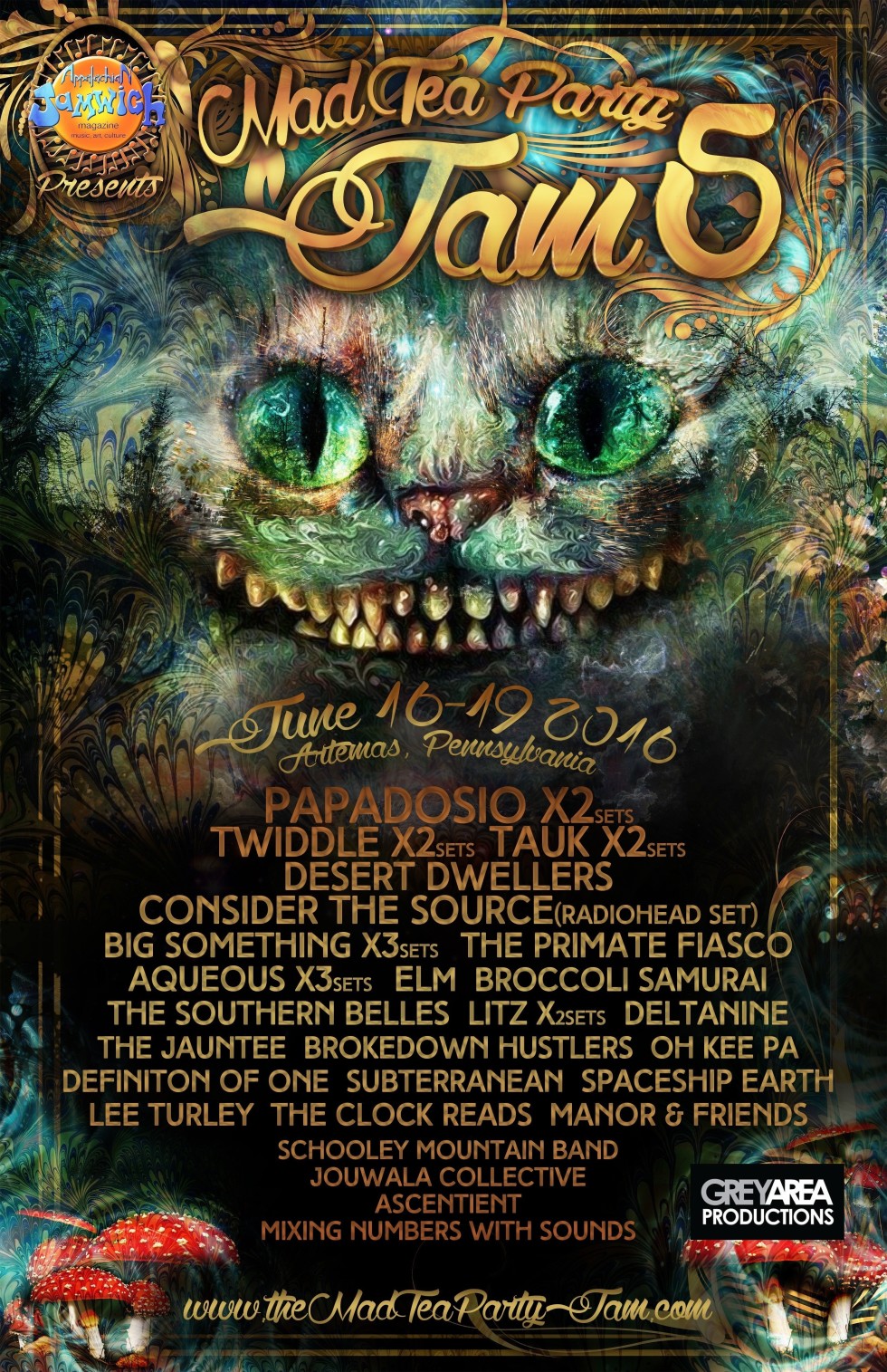 What an adventure The Mad Tea Party Jam was! The weekend began with the worst weather I have ever experienced at a festival and ended with absolutely gorgeous skies and beautiful friends. The festival is held at Four Quarters Farms in Artemas PA. If you've never been, I highly suggest a visit to these sacred grounds.

Mysterious forests littered with altars dedicated to various deities and revered Earth bound creatures. Show your respect by leaving a offering or walk on by and soak in the beauty. There is a stage placed inside the honored Stone Circle which holds thirty-nine 16 foot 10,000 pound monoliths that stand on a hilltop outlining a the diameter of a massive circle. It's really a powerful sight. You feel the venerable energy engulf you. The grounds have all sorts of wonderful surprises for you to discover.

One being a majestic river that snakes its way through a bit of the property allowing guests to swim, relax and cool off. Quite a magical place that speaks a message of openness and adventure. Open your heart and welcome all things you come across.

After the smooth transition into the festival grounds, we found our perfect camping spot. You are allowed to travel the grounds via car, find a spot, drop your stuff off then go park your car in the designated lot. It's quite and interesting concept. It's always a blessing not having to lug your stuff into a festival's camping area. Having the ability to drive right up to your site is a rare luxury.

My basking in this luxury ended shortly after setting up. We crack open our first beer and start hearing this ominous sound from above followed by pieces of trees falling to the ground. Not 15 minutes after setting up our campsite hail the size of baseballs start smashing into everything around us. I yelled to the girls to run for cover, the only spot for that is under my pop-up tent. I handed them cooler lids and frying pans as I try to keep the pop up from collapsing. In the distance you hear screams of panic from various attendees. Lightning cracks a few yards north of us, thunder booms and bashes right above. Then flash flood begins to engulf our feet. A few minutes of chaos and quick thinking pass and then just like that, it was over. People started to emerge to asses the damage. Cars had been dented, areas flooded, lightning had struck a tree and it collapsed on a tent (luckily no one was inside), some pop-ups were destroyed, a couple areas had flooded but that's about it. No one was seriously injured. However, EMT's and Four Quarters Members insisted that another round was headed our way and instructed everyone to head for cover at the Pavilion Stage, which is a permanent structure with an awning and sturdy foundation. While we waited and ruminated in our sorrow that the music didn't start yet, many beers were drank. Eventually the time came where we all understood the second wave was not coming and could rejoice in the idea of music starting!

The headlining spot of the first night was held by Twiddle. The set was originally scheduled for 7:30 - 9:00 and the second set for 10:30pm - 12:00am but the storm caused both to get pushed until later. So they started 9:45pm, took a 5 minute break and played until 12:20am. It was a joyous occasion to say the least. Music was finally rocking and us hippies could get to dancing. Broccoli Samurai closed out the night for me at the Pavilion stage, they did a Lotus cover that tore the roof off the place.

Woke up the next morning with the sun shining and a slight hangover but that's nothing some hair of the dog couldn't cure. The festival was back into full swing, sets on time, vendors open and areas drying out like there wasn't a flash flood the day before. After a day of cruising the grounds in the sunshine, I was ready for Consider the Source. They performed a killer Radiohead set. It was an interesting take on the classic tunes I have come to love over the years. Gabriel Marin, the guitar player, has this alluring way of combining guitar riffs with vocal sequences that both come screaming out the PA system via his doubled necked guitar. They are extremely talented trio of musicians. The crowd was in awe of their musical prowess.

Part of The Untz family, Desert Dwellers, were an awesome accent to Mad Tea Party Jam. They took a late night spot at the Pavilion Stage. One of the focal points of the weekend was this set. As the stage started getting packed the set started getting weirder, then heavy and finally climaxed with the some of the biggest womps in there repertoire including the legendary, "Seeing Things."

Another massive highlight of the festival was TAUK. If you've never seen these dudes live, make it happen. You will not regret it. Straight up heavy funk bass lines that make it impossible to not move your feet. Tauk is one of those groups that you can tell are so in tune with one another and it's evident through the jams they produce live. They played two sets, one on Friday and one on Saturday. Each were mind bending in their own way.

Papadosio are festival veterans, playing anywhere and everywhere it seems. Each time I see them it's a different experience. I know that every time I seem it will be unique and a high point to the weekend. This time did not stray from the usual pattern of impressiveness. Long groovy jams with alluring synth lines captivating guitar licks and driving bass tunnels to sucked away in.

Mad Tea Party Jam 5 was one for the books. It started a little rough but morphed into the perfect festival experience. Beautiful welcoming vibes, blue skies and warm sunshine, hammock naps, dancing until sunrise and unforgettable performances.