Hot off a streak of sold out shows, Notion Presents deals out more heat this year with the second permutation of Lunar Tide Music & Arts Festival tonight.

Held in a new location, the hidden gem that is Copernicus Center in northwest Chicago, (complete with its refurbished 1920’s styling and traditional Greek sculptures) is a treat to behold (not to mention the starry night motif ceiling-always a plus).

The biggest news about the return of Lunar Tide is the grand slam lineup. Relentless exclamations of “No Way!” and “All these in one night?!” will follow as your friends run down the list of names we all otherwise associate as headliner acts; one after another after another.

Last year did not let us down in this regard, with heavy hitters such as the incomparable Mt. Eden, Zebbler Encanti Experience, The Widdler, and Ekali, along with Chicago hometown heroes The Palmer Squares. In comparison, however, last year was only the warm-up.

This year, all the pieces are in play. Up and coming troll Levitation Jones kicks it off, right after unleashing an entirely original set in front of a sold out audience at Chicago’s own Beat Kitchen, a landmark moment also shared by the odd and even more odd Yheti, who rocked a capacity crowd with his weird bass and fiery presence. Chicago’s adopted son nastynasty hits the decks with the dirty-grimy after being gone and away from us for oh-so-long. You may need to take a shower afterward…

Returning to Lunar Tide Music and Arts Festival this year is the incomparable man himself, The Widdler. After melting the house to a puddle on the pavement, we couldn’t resist bringing the man back to have a second swing at a Chi-Town audience. Famous for throwing down the Old Dub that we all miss from the 2008-2009 Golden Days, do not sleep on the set from this scene staple.

Before bludgeoning everyone with the rest of the heat-status lineup, allow this author a second to point out something that may seem obvious- It IS called “Lunar Tide Music and Arts Festival”. A huge part of what makes Lunar Tide different from other fests is the emphasis on street art and street artists. Scene legend and crazy guy Raf Mata will grace our eyeballs with some eyeballs of his own – a theme in his art. Just beware not to feed the troll. Chicago Natives are also heavily represented, as we love to heavily represent them! Peep Notion homies Tom Loranz, Abby Aura, the unique and surreal stylings of Walrus Cobbler and Chrispy, Afrokilla, Brain Killer, BunnyXLV and many, many more, creating, live, for your epiphany-inducing pleasure and aesthetic musing.

Back to the juicy goodness. Frenzied is not a strong enough word to describe how having Jade Cicada return to a Notion Presents lineup. His sold out show in a “discreet” location was one of the highlights of Notion’s activities of last year. He returns with the energy of a new and well-received EP Eolian Oms, alongside Freddy Todd, whose artist name may not exactly be indicative of how nice and down to earth the man himself truly is. Riding the success of his recent side project, Guccimen (w/ Space Jesus), we are beyond prepared to hear some of his new material, collaborative, solo, or performed live on kazoo. Whatever he has for us. 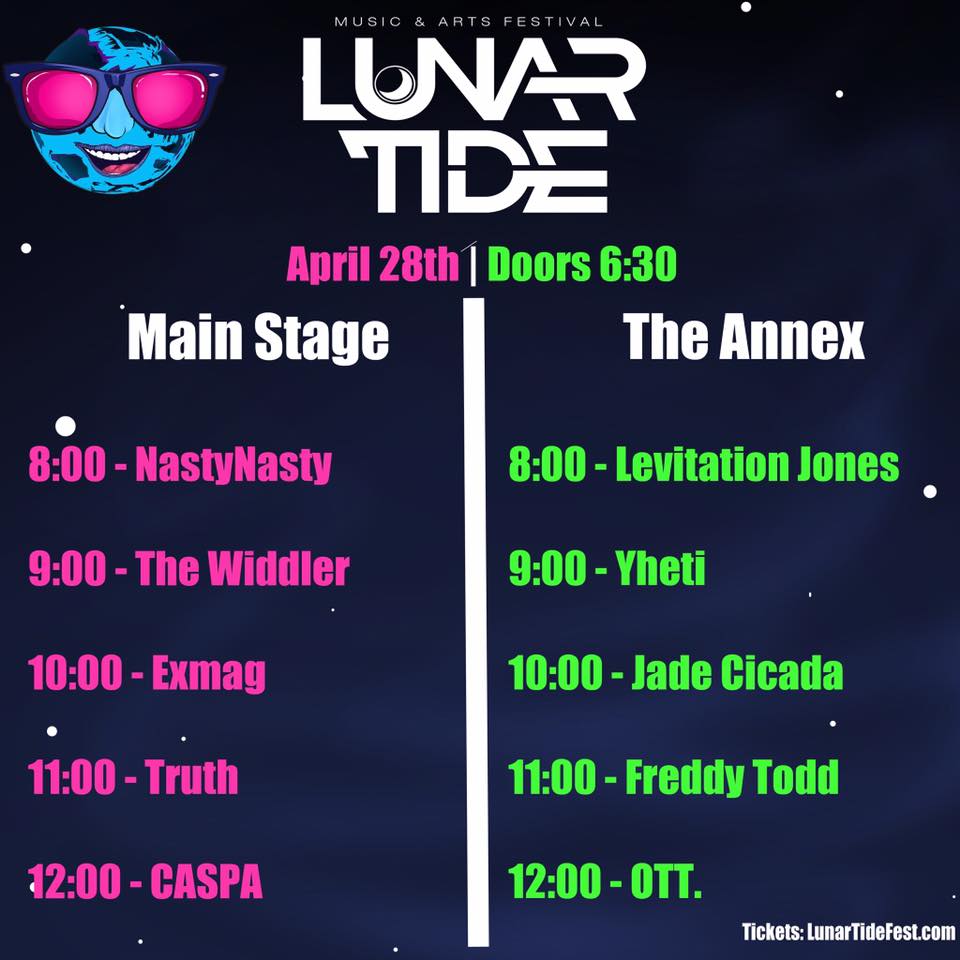 It is at this time that we announce the fence-swingers, the heavyweight champions, and the pedestal worthy, all of whom we can barely contain ourselves over. First we have the duo whose cavernous, dark dub beats instill a feeling of spine-chill and head-bang with each note: Truth, hailing from the land even further down under, New Zealand. It is to be fully expected that our boys will instill the ever-beautiful “bass face”, and an occasional muttered “Oh damn…”

Don’t let the darkness take hold, however, because the funk has only just begun to jump. Exmag then seize the stage, willing and able to put you “in the mood”. Try to keep it in your pants as the love spills past your ears and right into the soul that the funk stylings only just reminded you existed at all. Expect lip-biting and the phrase “Unfff”.

If Exmag has you dreaming about kissing and snugglin’, don’t let this next band stop you from indulging in fantasy. Let the ethnic electronic ambience that is Ott. lift you into the world of dreams, where nothing is impossible, fairies flit about on toadstools and mushrooms, and nature is not somewhere else, but, rather, right inside your head, and flowing through your being. After his recent successes with Tipper and Friends, and hot off a new album that is just plain immersive, we are more than humbled that the man who set the foundations for so much of the music we love will be tickling the knobs before our very eyes (and ears).

And finally, how could we ignore the London Genius that dominates this lineup, just as he dominates the scene that he brought into existence, in this country and all around the world. Caspa, making the trek all the way across the pond just for you, has no shortage of success and name recognition. What truly excites us is the fact that this is a rare opportunity to hear a unique, full sound system (Caspa is no undercard…) unleashing of the mastery that spills from the mind of this absolute crown jewel of the electronic community. Big Up Caspa, whose sound defined an entire generations musical aesthetic, whose label (Big Up Dub Police) carried London styling into the garages and warehouses of the Americas, and gave us all an anthem to live by as we all try to come up in a hard world: Where’s My Money.

So there she is. The gargantuan lineup and live street art event that is Lunar Tide Music and Arts Festival. To get in on the show, tickets can be found online at LunarTideFest.com, but we highly suggest visiting out friends at SlothSteady at 1440 N. Ashland for discounted hard copies.