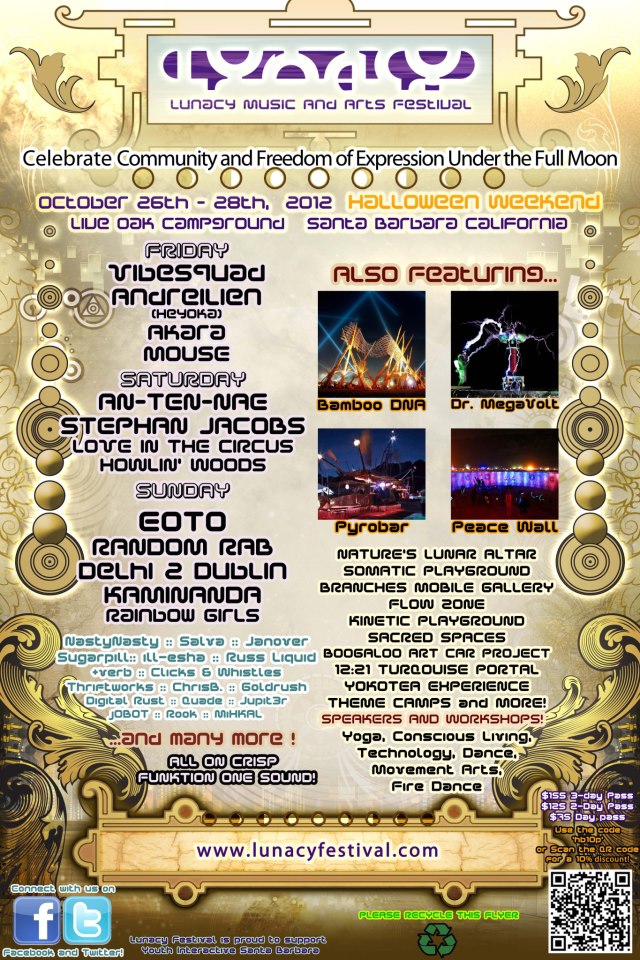 Dance in the moonlight this Halloween among the majestic trees of Santa Barbara’s Live Oak Campground for the inaugural Lunacy Music and Arts Festival. Nestled in the forests of some 40 acres of primitive landscaping, Lunacy is set to be a gathering of celebrations in honor of the full moon.

Scheduled to take place on October 26th-28th, the festival will feature an all-encompassing music lineup with over 50 artists and styles ranging from soul to hip hop to world fusion. With both live band and electronic DJ performances, Lunacy’s musical selection is sure to please just about any wandering ear.

In addition, Lunacy will host a variety of visual treats. Attendees can experience gallery art, performance art, live painting, and unique artist installations such as the giant Earth Moon Mandala built by Nature Dreamweaver out of naturally-found and recycled materials in honor of the full moon and her connection with society.

Adventure through the Flow Zone, have a drink at the Pyrobar, and indulge in all the other themed environments that Lunacy has to offer. Workshops, held by prominent individuals mastering in the likes of everything from meditation techniques to experimental documentary film, will be scattered throughout the festival grounds as well. Festival goers are also encouraged to dress up for the festival’s many Halloween events, such as the Costume Contest, Zombie Crawl, and Friday night’s Super Hero & Super Villain Party!

Tickets to Lunacy are currently priced at $155 and grant purchasers access to all of the festival’s offerings for all three days, including camping. Hard copy tickets can be bought at any of the selected Santa Barbara ticket retailers, as well as at the Live Oak Campground box office. All tickets purchased online can be redeemed at will-call upon arrival and will require the credit card used for purchase and a valid government-issued photo ID (i.e. driver’s license or passport; student IDs will not be accepted). Car camping passes will be required in order to bring your vehicle into the campgrounds, additional parking will be provided outside the venue for a $15 fee.

EOTO
A duo from Colorado and California, EOTO is the collaborative project of Michael Travis and Jason Hann of The String Cheese Incident. The live electronic jam band will headline the festival with their deeply resonating and bass-heavy sounds, backed by the infamous 3D ‘Lotus Flower’ stage design that has mesmerized audiences across the country throughout their recent touring.

Love in the Circus
Take a step back and unwind yourself to one of the more relaxing acts on the Lunacy lineup, Love in the Circus. The band’s jazz-infused drift is steered by the irresistible sound of lead singer Leanna Rachel’s voice and layered with the instrumental brilliance demonstrated by the rest of the band: producer/guitarist Chris Brickler, drummer Curtis Cunningham, percussionist Cha Chi, harpist The High Priestess, and violinist Leah Zeger.

Tha Fruitbat
Tha Fruitbat is the drum ‘n’ bass project of musician Evan Schneider, a member of Sacramento’s Command Collective alongside other artists like Tycho and Dusty Brown. Recording and sampling his own music into his production, Schneider engineers an edgier approach to electronic music with mystifying breakbeats and experimental basslines that will send chills down your spine and into your dancing feet.

Russ Liquid
As a young music maker, Russ spent the bulk of his early career traveling the Eastern hemisphere as part of a jazz quintet. Nowadays, dedicating his time to electronic music, he has to grown to become one of the West Coast’s most aspiring music producers whose style illuminates the colorful side of bass music.