One of the hottest touring acts on the scene today, post-rock/electronica/fusion act Lotus continues to win fans from coast to coast, and break new ground in the studio. In that tradition, recently the band announced it would be working on a hip-hop album, its first, entitled Monks, and starring a veritable who's-who list of some of the most revered names in the business. Jordan Calvano got a chance to speak with Luke Miller about the concept of the album, touring with Lotus, and his new disco project, Luke the Knife.

Lucky for us, we've also got a brand new tune from the album. Enjoy "Another World" featuring legendary Blackalicious member Gift of Gab.


Lovin’ the new album Luke! What was the initial inspiration behind Monks, and where did the idea for creating a hip-hop based Lotus album stem from?
It basically started with this one track I had written originally called "Tarasque." It was a hip-hop tempo joint, and originally we used some cut up Biggie samples on one part. Then when we recorded it during the self-titled album recording sessions I contacted Mr. Lif to see if he wanted to write some verses for it. That song, now called "Different Dream," got left off the album because it didn't fit in. So then I decided to do a couple more tracks to go along with the Lif song and do an EP. It just kept spiraling from there until it became the full 16 track album.
How did the creative and recording process on this album compare to your last couple releases? Any new challenges that came into play?
For the vocal tracks, it was basically Jesse or I remixing tracks from Lotus. And then we did the instrumental interludes during the recording sessions for Build. I think the biggest challenge was trying to keep the remixed tracks more minimal to make room for the MC's and singers. With a typical Lotus song the instruments are taking up that space, so I had to learn to get rid of stuff to let the vocals breathe.
Monks features a slew of talented vocalists, including Ozay Moore, Mr. Lif, and Gift of Gab, just to name a few. What led you to seek out these specific musicians, and were you able to get into the studio with most of them?
Ozay had done another remix for us on our "Oil on Glass" album and I liked his flow. I love the Digable Planets so I wanted to get Cee Knowledge, plus he lives in Philly. Lyrics Born and Gift of Gab just have killer flows, and we've played shows with both of them in the past. We tried to get one of the Tribe Called Quest guys but it didn't work out, and I wanted to have Chali 2na, but he was busy doing a 4 EP project. But we ran into him at Fuji Rock and Camp Bisco and he really wants to do a track with us, so maybe we'll do a one-off with him at some point.
Have you guys always been big hip-hop fans, and what artists or releases were you listening to throughout the album’s conception?
I definitely love hip-hop. I lean toward the older stuff from the 90's - Tribe Called Quest, Digable Planets, Wu-Tang Clan. But I loved the Jay-Z / Kayne Watch the Throne album, and Kendrick Lamar has some decent stuff.
Can we expect to hear some of these songs implemented into live sets any time soon? Possibly with some of the vocalists present?
We've done two of the tracks live with the MC's. And we've played a few others live as well. I don't think you'll see a whole tour or anything, but we'll throw them in here and there to mix it up. This was more of a studio project though, generally speaking.
You guys have played a bunch of shows and festivals this summer. Any events that really stood out to you, and any concerts your truly looking forward to?
Electric Forest was the best festival in my opinion. I'm looking forward to our 2nd headlining show at Red Rocks on Sept. 13th. That venue is the best in the world, so playing there is a bit special. 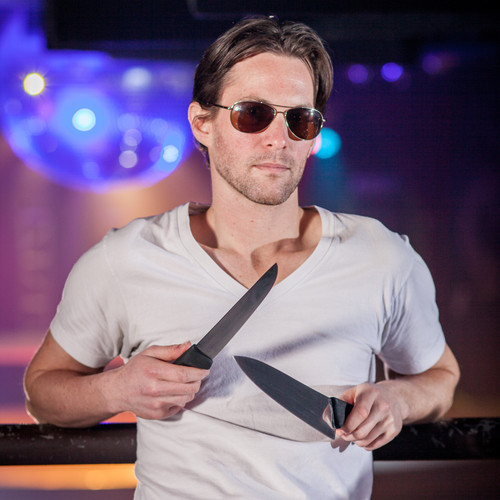 Let’s talk Luke The Knife. What influenced you to create disco and dance-laden beats?
I just thought of what I would want my perfect DJ to play. I want it to be a dance-party where everyone is smiling and grooving. For me that's disco and stuff that's in that vein like indie-pop, nu-disco, funky house.
What does the future of that project hold? We’ve heard a lot of edits, remixes, and mixes, but any chance for a full album in the future?
I've been putting my original production and writing time into Lotus. But maybe if I get some free time I could make a Luke the Knife EP. I don't want it to take away from Lotus in any sense, so I've funneled all my songs into the band thus far. But if we decide something I'm working on doesn't fit with Lotus maybe I could work with it for LtK.
Thanks for the interview Luke. Any important news you liked to share with us regarding any Lotus related projects to close things out?
Monks is out Sept 10th, Lotus Sept. 13th at Red Rocks, then a handful of Fall dates. We're working on the next EP now, but I don't know when it will be ready. And check out the Luke the Knife soundcloud page. I put new stuff up there every couple weeks.