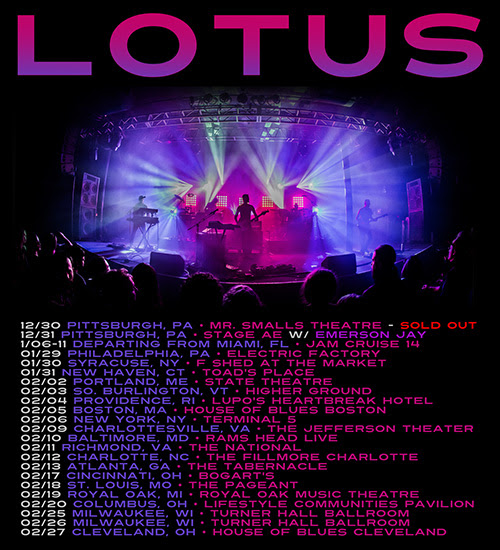 A few more winter 2016 tour stops have been added to the already bulging Lotus run kicking off the day before New Year's Eve and running into late February. A two-night stand has been added at Milwaukee's Turner Hall, and the band will make its debut at both The Fillmore in Charlotte, NC and Columbus, OH's LC Pavilion.

The post-rock, electro-jam outfit is running strong, hitting several spots in the northeast, southeast, and midwest this winter, including the much-anticipated Jam Cruise taking place the first weekend after the new year. They also have big stops in Boston, New York City, Atlanta, and St Louis, among others.

Listen as Lotus’ distinct style comes to life for their newest release, "Basin to Benin" which includes the B-side, "Tarot."

The pair of songs were pressed onto vinyl in Ohio by the infamous Musicol Recording studio. Not only are the grooves dusty and edgy in all the right places, but you can immediately tell the band was having fun when they recorded them.

An immediate antique groove with various instrumentations kicks off “Basin to Benin.”

Lotus’ own Jesse Miller said that, “Brass commands attention, so it was a lot of fun writing and recording the horn parts for 'Basin to Benin' with The Soul Rebels. They play with great energy and feel … I really like that both tracks don’t sound tied to a specific era. I think if someone came across this 7-inch in the bins of a second hand vinyl store they wouldn’t be able to guess it was from 2015.”

The second track, “Tarot,” is more layed-back, with a heavy emphasis on the guitar throughout. The band has found something special in its newest release, to say the least.

Head on over to Bandcamp and grab a copy of the vinyl for you or for a friend—the holidays are almost here!