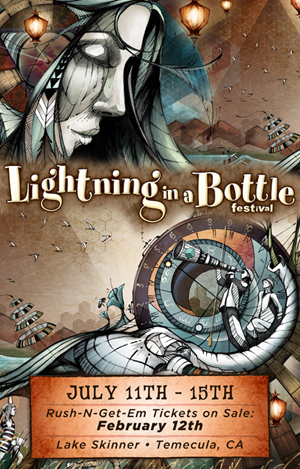 Southern California’s beloved art and music festival Lightning in a Bottle is getting a new home this year and is giving participants the chance to experience it for less. “Rush-N-Get-Em”  tickets went on sale for 48 hours beginning Tuesday, February 12th at 10am PST via Lightning in a Bottle’s website, so there are less than 24 hours remaining for this special offer. Regular ticket sales will begin on March 18, 2013.

Previously held during Memorial Day Weekend at Orange County's Oak Canyon Park, the annual four day festival was prompted to find a new location when new zoning resulted in the park bordering Conservancy-owned land, forcing out all large-scale music festivals. The Orange County Fire and Sheriff’s Department provided letters of recommendation to assist the festival in securing its new location.

Lake Skinner County Park is a hidden gem of Temecula in Southern California that The Do LaB feels fortunate to have found for their long term plans. The new site, which sits on a peninsula next to the lake, will expand the capacity of the event to 15,000 participants as well as provide more facilities like full RV hook-ups, while yielding the same natural beauty and open space that made previous festivals so well received.  Besides the beautiful view, the new location is also more compact, making the grounds easier to navigate and providing for a more comfortable camping experience.

An amazing lineup of music, speakers, workshops, and performance art is in the works and will be announced on April 23, 2013. The festival will once again feature three main stages for music and performance art along with multiple smaller stages and interactive areas spread throughout the festival grounds for participants to explore and discover workshops, speakers, and intimate music sessions. These smaller stages and interactive areas will also keep the festivities going all night long after the main stages close each night. To beat the heat, there will be daytime water areas and features planned to keep participants cool, similar to The Do LaB's Oasis stage at Coachella.

Based in Los Angeles, The Do LaB’s mission is to create experience as art and bring communities together. Aside from showcasing electronic music artists at their monthly events in Los Angeles and San Diego, The Do LaB are best known for their unique art installations/stages and cutting edge acts at the inner misting Oasis stage at Coachella in addition to producing Southern California’s Lightning in a Bottle and the game changing 2012 Winter Solstice event The Great Convergence which took place at the pyramids of Giza in Egypt. Lightning in a Bottle is known for its unique atmosphere that focuses on art, spiritual well-being, and sustainability as much as it does on music. It has become the crown jewel of the underground sound that is driving culture from its west-coast and London roots all the way into the laptops of middle America. The Do Lab’s work has also been showcased at Virgin Music Festival, Global Gathering, Portugal’s Boom Festival and many more. For more information about Lightning in a Bottle, visit www.lightninginabottle.org or follow LIB at www.facebook.com/LightningInaBottle or The Do LaB at http://www.facebook.com/TheDoLaB and https://twitter.com/TheDoLaB.