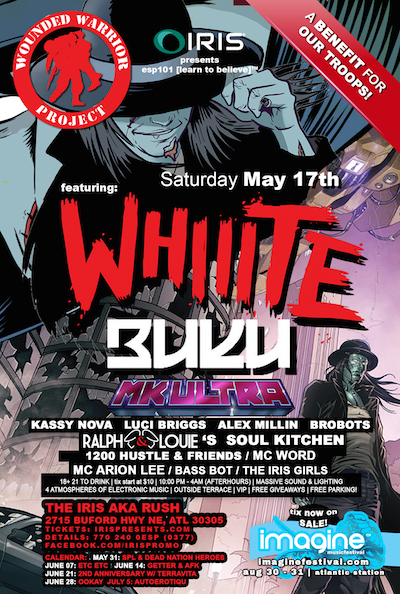 It's easy to lose sight of what's really important when you're focused on "who's playing at which party in which city" night after night. Thankfully, though, there are ways to make the party count.

Our pals at IRIS Presents obviously know how to throw killer parties, but they also know how to lend a helping hand, and that's why we love working with them so much.

This Saturday, May 17th the RUSH LOUNGE in Atlanta will once again be transformed into an EDM wonderland, but a portion of proceeds from the night goes to benefit the Wounded Warrior Project, which is such an important cause.

It's really the most direct way to show the men and women who have served this country how much we truly value their service, and honor their sacrifices. Such an important concept to consider as we settle in for Memorial Day Weekend at the end of the month. It's not just about hot dogs and days off.

At any rate, we couldn't be more thrilled at the headlining selection for this particular event. WHIIITE will be headed out to the ATL from his SoCal home base for a night of trappy goodness. Chris White is half of the brains behind CONTROL, one of the most established and powerful weeklies in the country, taking place each Friday at AVALON in Hollywood. Beyond coming up in the world with Skrillex and cranking out tunes for Interscope, Dim Mak, and Burn the Fire, White is one of the fastest rising stars in the trap game.

Backing up WHIIITE is one of UNTZ fans' favorites. BUKU has been absolutely crushing the road game, hitting clubs and theaters coast-to-coast with tons of huge acts, and throwing down some gnarly remixes to get the blood flowing.

We were so thrilled to get involved with the release of his Down EP, that has just been a monster, and the guy has even kicked it and tossed off a fun mix for Sway. Pretty badass.

And IRIS favorite MK Ultra will be blowing the roof off the place, as always. She'll be backed by tons of support, major production value, cryo-cannons, the IRIS Girls, and the best EDM experience in the city.

Come out, have a great time, and support a great cause. Because when the party's over, the good feelings will last on and on.

Keep an eye on the calendar, which includes dates with SPL, Getter & AFK, ETC! ETC!, and more! Visit www.irispresents.com to stay on top of all of it!