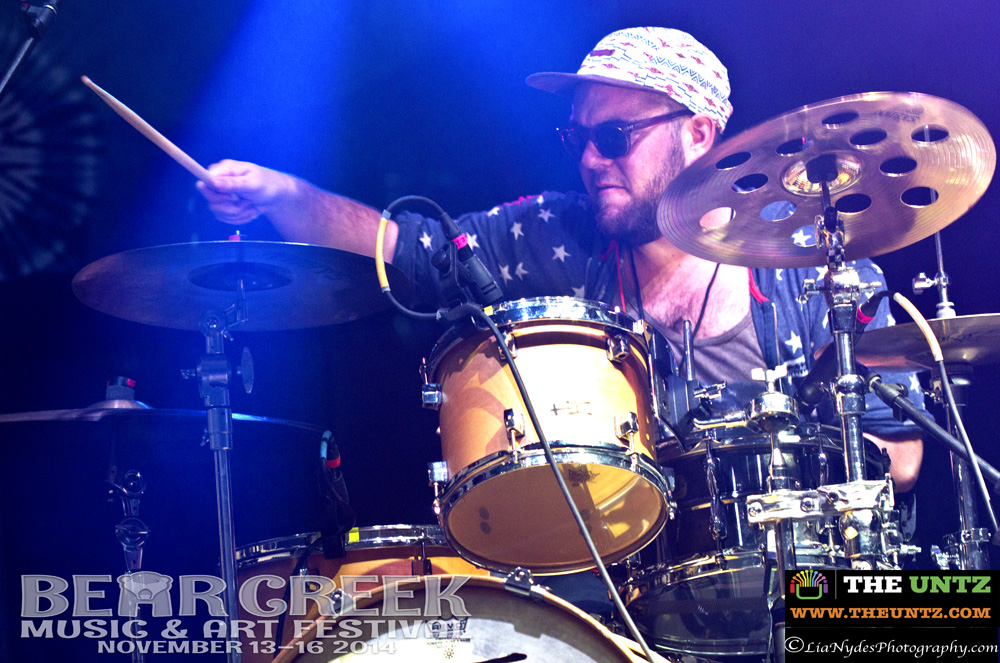 The Floozies have taken the livetronica world by storm with their funk-inspired jams that appeal to a large audience of electronica, old school funk, and dance music fans.

Brothers Matt (guitarist/producer) and Mark (drummer) Hill from Lawrence, Kansas, are currently tearing it up on the road and will be heading out on their Do Your Thing tour in mid-January. I spoke to Mark in between shows in Baton Rouge and Houston on the Forever Love tour.

It was a pleasure seeing you guys play at Bear Creek.

That was really fun.

What was your favorite thing about playing at Bear Creek?

It’s a special festival because a lot of the places we play have similar acts to what we do electronically. It was just cool to be around so many really talented experienced musicians. A lot of those guys have been playing for years. I’ve been listening to those guys for years, so just to be at the same festival with some of my musical heroes is pretty cool.

You guys played a few new tracks during that set. Is there a new album coming anytime soon?

Definitely! We’re almost done. I think we’re going to try and get it out January. My brother keeps having new ideas so it keeps pushing back and we keep adding things. 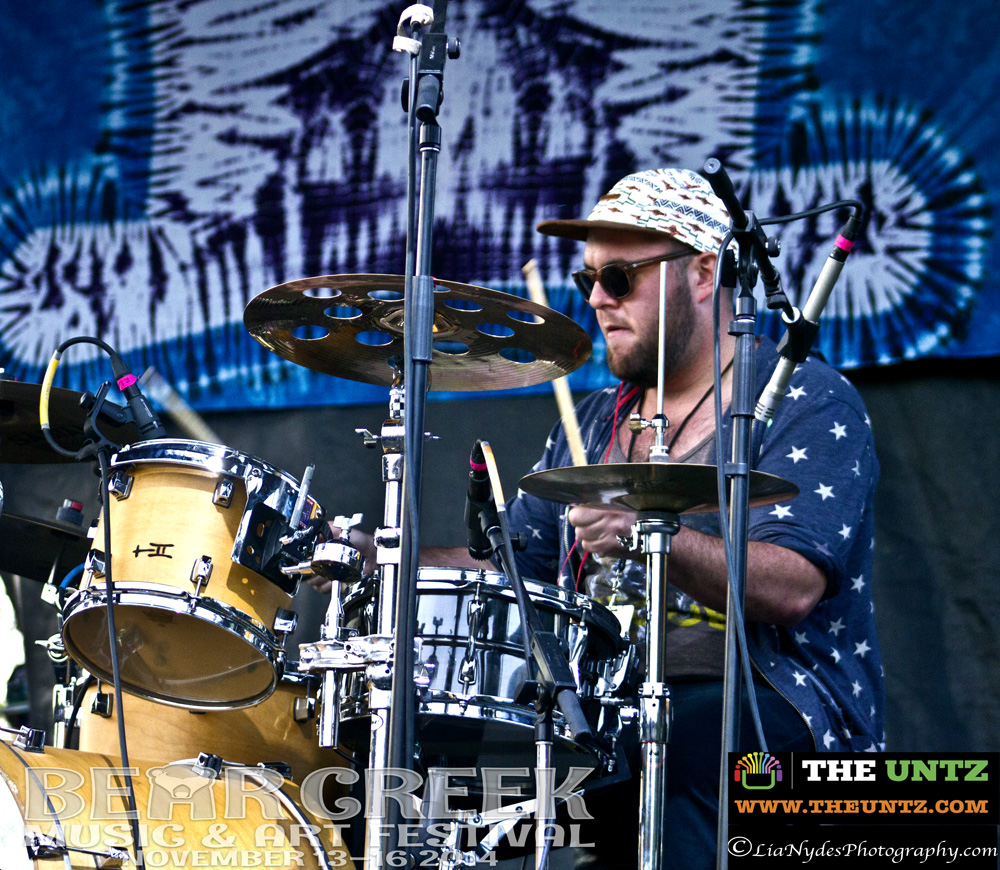 You don’t make set lists, so how do you decide what songs to play during your set?

We kind of just feel it out based on-- We kind of just let it happen subconsciously, if that makes sense. We react to what we’re feeling and what it seems like the crowd is feeling. And then we improvise a lot, so if we start jamming and we feel a song that it could fit into, we transition into a song. It frees it up for us to have a little bit more fun on stage, which I think is better for the whole experience for everyone.

Definitely, yeah. We don’t really even talk on stage. We just kind of know what we’re both going to do.

What’s it like being on tour with your older brother? Is it a dream come true for you guys?

Yea, it’s great. It’s made everything a lot smoother. Plus, we always got along growing up. I like to say it’s ‘cause he was always immature for his age and I was always mature for my age, so it’s kind of like we’re twin brothers in a way. We’ve always got along musically, too, which is the most important part. We have the exact same vision, basically.

You guys are heading out on the Do Your Thing tour coming up next year. I know you’re on tour right now, as well. How is the next tour going to be different from previous tours?

We’re playing a bunch of new spots actually. We’re doing some Midwest stuff, towns that we’ve already been in that we love, to start, which is great. It’s a great way to start a tour, playing towns that you love already. And then we’re going to Oregon and California, which we haven’t done a whole lot in California, so we’re doing The Roxy in LA, which is pretty legendary from what I’ve heard. We’ve never played in Portland or Eugene; I think we’re doing both. So I’m just excited to see some new cities and play for some new people.

I noticed that there seem to be a lot of old school funk sounds in your music. Are there any particular influences that you can name and did you grow up listening to those artists?

Yea. I grew up listening to funk ‘cause my mom was just always into that stuff. She showed us Parliament Funkadelic when we were wee babies. We just kind of got lucky in that respect. I was listening to Kool & the Gang when I was in elementary school. James Brown, all that good stuff.

You guys have done lots of collaborations in the past. Have you thought about adding any new members to the band or collaborating with any new artists?

We’re always down for collabs. There are a few collaborations on the new album. As far as ever adding anyone to the band, I don’t think that’ll ever happen. It’s just another thing to worry about, and we like having the freedom and since we share the musical vision, including someone else would be rough. 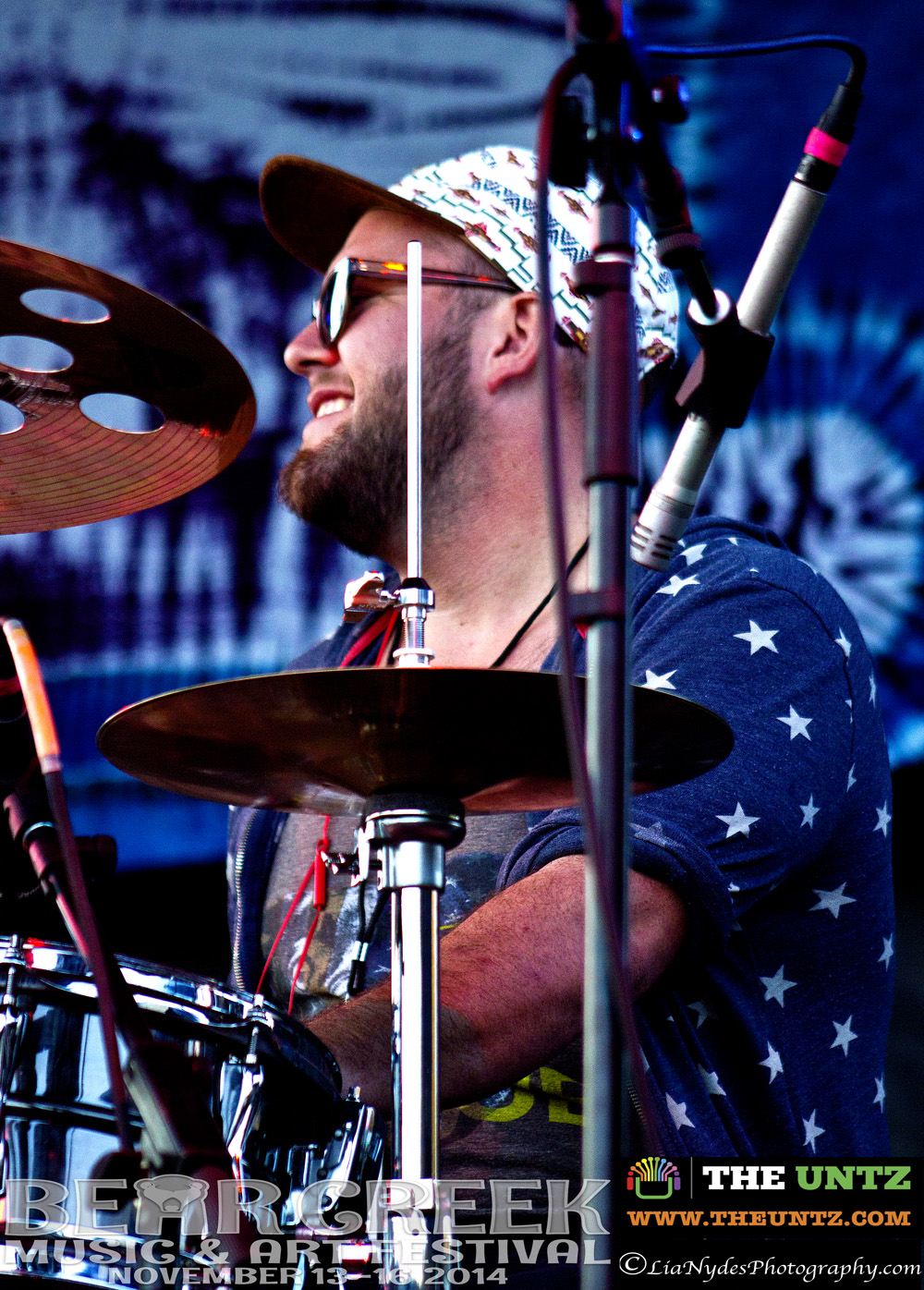 It works well with just the two of you, as it is.

And you are playing Rainbow Serpent Festival in Australia next year. How excited are you for that?

I’m pumped! I’ve never been to Australia. It should be awesome.

And you’re also playing an open bar NYE party in Atlanta with Stokeswood and Funk-U. Are you excited for that as well?

Oh, absolutely. We just played Atlanta with Sound Tribe a couple weeks ago and we always have a good time in Atlanta, so spending New Year’s there is going to be awesome.

Is there anything else that you’d like your fans to know about what you guys are working on right now?

We’re just going to keep making music, keep touring, and hope to see everybody. We can’t be everywhere at once. People always get mad that we’re not in their town, so we’re trying our best (laughs).