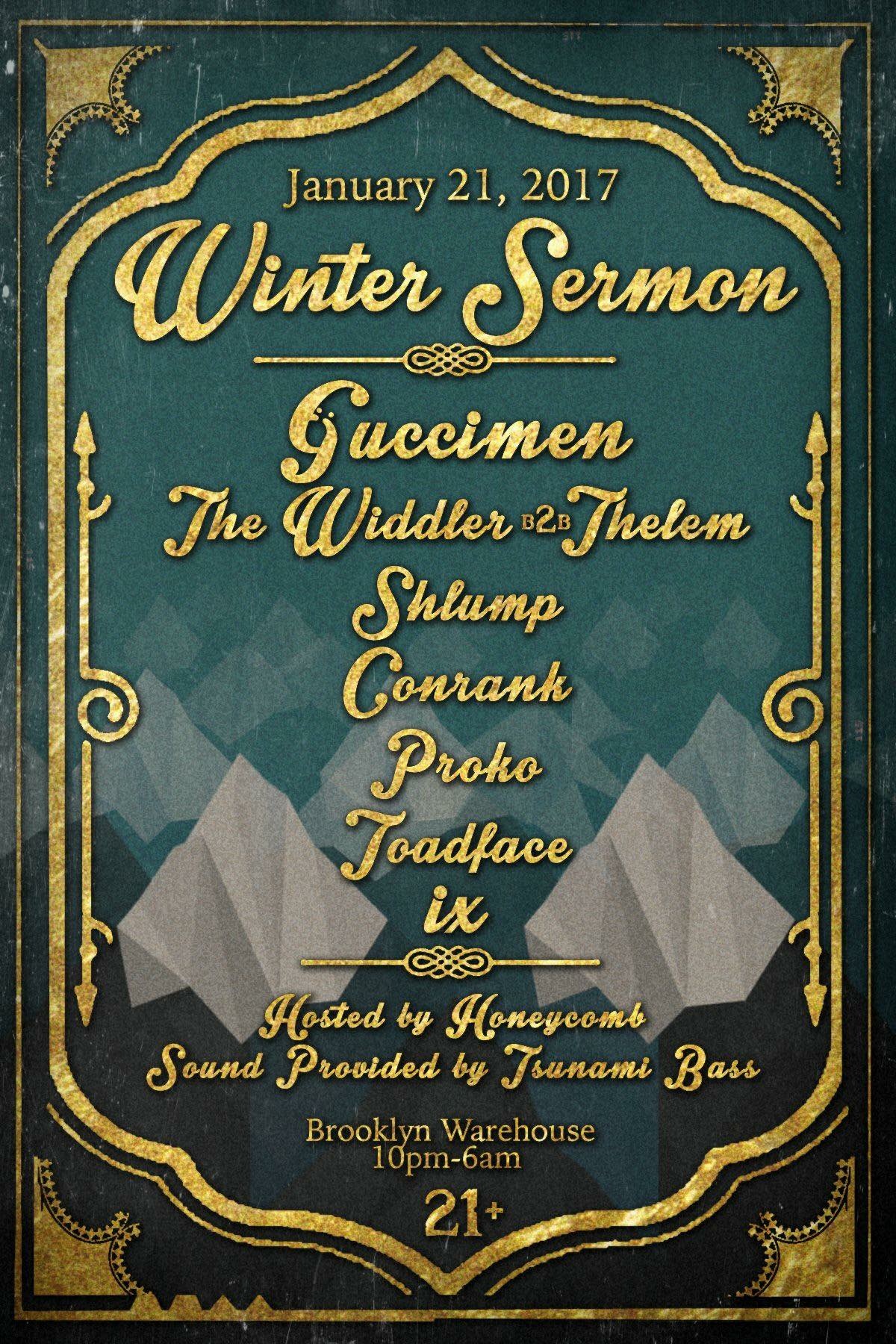 That undeniable underground bass sound is spreading. Like minds are popping up in pockets all around the country and the gospel is reaching new ears far and wide.

Everybody is ready to hear the Sermon.

The Brooklyn-based low-end providers are teaming up with Tsunami Bass Sound System to bring that cutting-edge, hybrid bass movement to the heart of New York City on January 21st in old-school style: holding off on announcing its warehouse space until the last moment. By melding the most progressive electronic music with a classic rave twist, this Winter Sermon will go down in history as a game-changing party.

And ooooooooh that lineup.

Longtime collaborators and favorites of The Untz Space Jesus and Freddy Todd are bringing their new Guccimen project to BK. It's wild, twisted, and packs a punch. Exactly what you'd expect from these two space bass explorers. While Jasha Tull has been helming some major Wakaan projects, and Freddy's last album dropped on the ever-funky All Good Records, the pair slipped out a sneaky three-track EP without label support on the sly. And it's a killer.

If you are a dubstep purist, you're already freaking out about The Widdler B2B Thelem set. Throw in a few of the hottest acts in the game right now with Shlump, Conrank, Proko, Toadface, and ix, and you've got an absolutely ridiculous lineup featuring the superstars of tomorrow. Plus your host and emcee for the night Honeycomb will make sure everyone's feeling hyped and ready to rock until the wee hours.

But wait! I recognize some of these names...?

Very astute, you'll notice half these guys are going to be performing at The Untz Festival from June 2-4 in Mariposa, Cailfornia. You're quite the detective. The Sermon crew is so on board with our mentatlity about the future of bass music that we just had to connect with them and help push this sound on the east coast. We're working hand in hand to make this dirtiest party of the winter. Then you can come blow it out with us in northern California this summer. That's teamwork, baby.

Grab your tickets now, because the early birds and the first three tiers are already gone! There's a lot of hype on this event, so make sure you're not left out in the cold. The spot will be running 10pm to 6am for the 21+ crowd, so that's 8 solid hours of mayhem in the middle of a brutal winter. Ticketholders will be notified of the location as the event approaches. This lineup will warm your ass right up.