Under the stage name of LCD Soundsystem, James Murphy has been making critically acclaimed music since his first official release of the underground favorite” Loosing My Edge” in 2002. Since then he has continued to create his own brand of dance-punk music that has gained the attention of an ever broader audience. His latest release, “This is Happening” debuted at number ten on the Billboard 200 in its first week of sales, and earned an 84/100 rating from review aggregator Metacritic (based on 38 professional reviews).

The 2010 Tour of “This is Happening” found Murphy and his band in Burlington, Vermont for the first time. James Murphy’s music is channeled through his touring band, which consists of Pat Mahoney, Phil Mossman, Tyler pope, Nancy Whang, Matthew Thornley, Al Doyle, J.D. Mark, Phil Skarich, Gavin R. Russom, Janine Rostron. According to Murphy, he and the band thoroughly enjoyed the time they spent biking along Lake Champlain and exploring the downtown area of Vermont’s idyllic Queen City. This was made clear with the amazing energy and genuine enjoyment that they would display throughout the show.

LCD Soundsystem has been playing select shows with Sleigh Bells, a Noise Pop duo known for their brash instrumentation, screeching female vocals, and tight beats. Amplified through 3 Marshall Stacks, guitarist Derek E. Miller’s guitar- accompanied by a pulsating drum machine and Alexis Krauss’s powerful voice, lead patrons through the basement of Memorial Auditorium and into the main concert hall. Even though the auditorium was far from packed, those that were there were clearly digging Sleigh Bells often impetuous and unrefined sound. Krauss and Miller did an amazing job reaching a small crowd in an auditorium that is not especially conducive to live music. I am excited to see what the future brings for them.

When the LCD took the stage and began playing the opening notes for Dance Yrself Clean, Murphy looked a little rough. He seemed to literally be yawning the “Ahhh’s” in the opening part of the song. As the tension built Murphy started showing signs of life. When the heavy sytnth hit, the sweat patches began their quick conquest of Murphy’s shirt, as he paced the stage. The band gave a very energetic performance of what is probably my favorite song on the album.

After a very brief interlude, the band launched into “Drunk Girls”, the first official single on the new album, followed by a slightly older favorite, “Get Innocuous”. Highlights included “Tribulations” a song reminiscent of the Fischerspooner’s sound, as well as “I can Change” and “Someone Great”, which was the first song that introduced me to LCD Soundsystem.

After the show I was discussing with a friend how to best describe what we had just seen. Without exaggeration, this was one of the best shows I have ever witnessed. There is no real way to convey that in a reserved manner without sounding trite or even unbelievable. So here it is: this show was absolutely incredible.

Towards the end of the show, during a song that I cannot recall, several lasers were integrated into the light show. I overheard someone wondering aloud as to why they were not using the lasers throughout the entire show. This struck me as a poignant metaphor- channeled through LCD Soundsystem, Murphy has created an arsenal of textures and sounds that, much like strong spices and exotic ingredients, are better used sparingly and at the right intervals. Sure LCD possesses the power to blow your mind at any given point by using everything in their arsenal, but what makes them so unique is their ability to use each ingredient in the correct order and correct amount, which creates the perfect recipe. 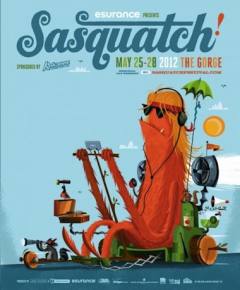