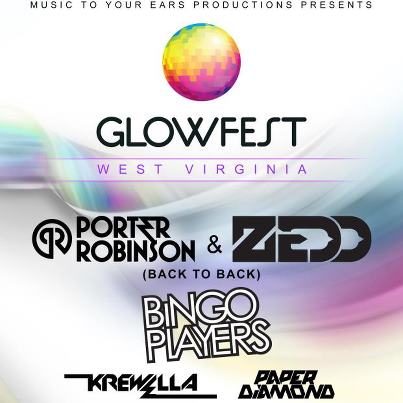 The arena was empty for the first few acts, but with people arriving by the busload, it filled up fast.  Scantily clad girls in neon colored booty shorts and bikini tops were pouring in alongside glowstick toting frat bros with painted faces.  Security was pretty serious, emptying pockets and scanning everyone, but once everybody got past that, the place was a non-stop party.

Paper Diamond started off with his new trap set playing mostly his latest stuff from his forthcoming EP on Diplo’s Mad Decent label.  He has a fresh new flavor that is more dub and not as much groove as we are used to with Alex B.  His songs employ hip-hop tempos and drum sounds with glitchy rhythms and he was definitely playing to the crowd with high-energy buildups and heavy bass drops.  He played a brand new song that he has been working on with Protohype that was absolutely thrilling and definitely a hit in the making.  He also played “Can We Go Up” which is a Paper Diamond set staple in the eyes of fans and festivalgoers alike.  His music production techniques were electrifying to say the least, incorporating elements of hip-hop, electro and house music.

With more wild fans pouring in, Krewella continued the evening, kicking off their set with “Play Hard,” the title track from their latest EP. Crizzly’s “Chain Hang Low” remix, Dirtyphonic's “Killin It” remix and Toro Toro’s “Go Deep” remix were just a few of the crowd gratifying tracks that these amazing DJs threw down. During their set, confetti cannons were shooting off and also a few lucky fans in the front row got sprayed with champagne and some even got the bubbly treat poured into their mouths.  Krewella consistently lays down awesome female vocals on top of bomb dubstep beats in their original tracks and the remixes they play are enough to blow any crowd away.  At the end of their set, Krewella’s sister vocalists Jahan and Yasmine did a stage dive into the crowd and surfed the crowd before returning to the stage to thank their fans.

Bingo Players played most of the popular originals including “Cry Just a Little,” “Mode” and “L’amour.” The progressive house melodies and dubstep beats really got the crowd moving with “Who is Ready to Jump” by Chuckie, “How We Do” by Hardwell and “Dear New York” by Firebeatz, just a few of the incredible remixes that pumped through the speakers. However, the one track I was disappointed was left out was the Bingo Players original “Rattle,” which has countless prevalent remixes that would have been perfect for this festival.

Zedd and Porter Robinson performed an intense, two-hour, side-by-side set, twice as long as the other performers.  Featuring each DJs most famous electro tracks they were fortunately able to squeeze in every one of their illustrious crowd favorites.  To name a just few, Zedd played “Spectrum,” “Shave It,” “Slam the Door,” “Shotgun,” and the Electrixx remix of “The Legend of Zelda.”  Porter played “Firestorm,” “Breaking a Sweat,” “Volcano” and Dada Life’s “Kick Out the Epic.”  Also sampled were tracks by Swanky Tunes, Swedish House Mafia and Flux Pavilion.  Reel 2 Real’s 1994 pop song “I Like To Move It” and Timbaland’s “Apologize” were some other favorites snuck into the set.  Porter and Zedd’s extreme drops, strong buildups and grungy synths inspired awe among the sweaty fans, providing a flawless soundscape for an epic college rave.