Out of all the years I’ve lived in Austin, Texas and out of all of the many flavors of festivals I’ve tried, Fun Fun Fun Fest has always been one I steered clear of. I always thought it was a little too…punk rock for me. That being said, I luckily took a closer look at the lineup this year and was impressed by its diversity from the likes of Bonobo, Snoop Dogg, MIA, Tycho, and many more; I knew it was a festival that I couldn’t afford to miss again.

Fun Fun Fun Fest won my heart on the first day. F3 is set up distinctively, in that it is an outdoor festival with multiple stages during the day and a big block party with a plethora of shows hosted in venues across the downtown area by night. If ACL and SXSW had a rebel child, Fun Fun Fun Fest would definitely be just that, with a crowd consisting primarily of locals. 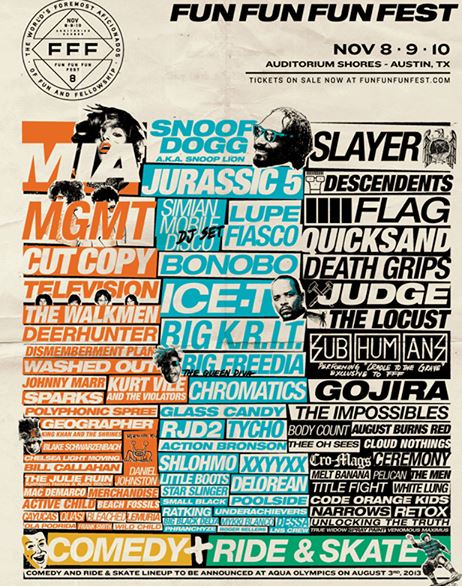 Auditorium Shores was full of sights, sounds and surprises to discover during the day. There were plenty of things beyond just live music to entertain patrons walking in between stages. The scene consisted of multiple skateboard ramps for both BMXers and amateurs, trees surrounded by beanbags for stoners, and spray paint art instillations complete with live graffiti artists.

F3 nights got rowdy as festivalgoers ran around town to find the official afters. The after-parties are free with an F3 wristband and operate similarly to SXSW in that it’s a first come, first serve basis. It’s almost like a scavenger hunt after the day’s festivities to make it to all the after-shows.

The festival definitely saved the best for last; Sunday FunFunFunday was the highlight of the weekend with performances from Bonobo (live band AND DJ set), shlohmo, XXYYXX, and Deltron 3030.  The blue stage is where most of the weekend’s highlights took place as well.

Bonobo (Live Band & DJ Set)- Simon Green (aka: Bonobo) played a set with his live band Sunday evening at the blue stage and it was chillingly incredible, as always. The Bonobo live band experience was a journey through genres, as sound roamed freely through downtempo, trip-hop and D&B, tied together by a common thread of raw rhythm through live production. The live band performance included Chet Faker on the drums, whom played two solo sets at the festival as well.

There couldn’t have been a more ideal way to end the triple fun weekend than at the Bonobo DJ set Sunday night at The Parish. Simon Green mixed in many of the same songs he performed with the live band, but sped them up to a more danceable tempo and incorporated more bass. The after party at The Parish proved that Austin knows how to get down; the crowd was one of the rowdiest I saw all weekend.

Chet Faker – His Saturday night after show at Empire Control Room was definitely the hidden gen of Fun Fun Fun Fest. For lack of a comparison to do Chet Faker justice, he is similar to an electronic Citizen Cope. Chet simultaneously sings and mixes downtempo electronica in a way that leaves the crowd awe-struck, with a purely soulful voice and raw talent. Although “Yo Diggity” has been remixed and covered countless times, Chet made it sound like the song was written for him when he sang it Saturday night. As a side note, it actually came as a surprise when Simon Green announced that Chet Faker was on the drums during the Bonobo live band set the next day.

Tycho- Other than Chet Faker, Tycho put on the rawest performance I saw all weekend. The Saturday night set was packed with ambient sounds, gorgeous energy, and fresh emotion. The ingenuity of Tycho is that they have no need for a crazy distracting light show; their raw performance put the crowd into hypnosis with pure musical talent and gorgeous soundscapes alone.

RJD2 – RJ Krohn spins so fast that it turned my head around to watch his Friday night set at the blue stage. He smoothly integrated hip hop into electronica and kept the crowd on their toes the entire set with his old school fresh vibe. It was a bit of a hard decision, but I’m glad I skipped the majority of Snoop Dogg’s set to watch RJD2 throw it down; RJ definitely won the Friday night rager award in my book.

XXYYXX- Marcel Everett got the Sunday Funday party started out on the right downtempo, basstastic vibe during his afternoon set on the Blue Stage. His set contained just the right amount of weird mixed in with a high dose of bass to vibrate the crowd into dancing.

shlohmo – The blue stage was definitely where the party was at all weekend, so I hung around between sets, and I received many surprise eargasms from the likes of shlohmo. That man makes some seriously sexy music. The electronic elements of his music heavily incorporate hip-hop without being obnoxiously trappy. There is something so uniquely sexy and chill about shlohmo’s beats; they’ll make you want to sip on some syrup and cruise around in a Benz. Shlohmo’s performance can best be summed up by the shirt he repped during his set, with the words “body high” printed on the front.

Glass Candy – This electronic rock duo put on quite the psychedelic spectacle complete with trippy dancers and groovy tunes. Their set is exactly what I would want to use as a sound track for traveling to mars with style.

Simian Mobile Disco (DJ Set)-  I know, I know…I’m REALLY late to this party (the duo has been around since 2005) but glad I finally jumped on the bus. It was very easy to get lost in the authentic dance party music Simian brought to Auditorium shores, as it felt like a time warp back into an 80’s disco party.

Deltron 3030- Spectacular funk are the two words that can best describe Deltron 3030’s set. An icon in alternative hip-hop, the group brought a packed audience to the blue stage Sunday night. The “Sunshine In a Bag” jam session that Deltron closed their set with was one of the most funkadelically epic moments of my life.

Jurassic 5 – These guys have been in the game since 1994 and they are still keeping it real. Their set was the most danceable hip-hop my ears have experienced to date. I was not expecting such a fun performance from a hip-hop group, but I had my mind blown by their Sunday night performance. What makes these guys so awesome is that they definitely didn’t take themselves too seriously; they whipped out dance songs like “The Harlem Shake” in between tracks and really hyped that crowd up.

Snoop Dogg- Apparently not going by Snoop Lion anymore, the Dogg is back to his gangster roots. I missed most of his set due to the RJD2 dance party, but I made the last few songs and it was a great time. Snoop Dogg brought a full entourage on stage, complete with a guy in a monkey suite, swinging around an inflatable penis.

M.I.A – It’s a well-known fact that M.I.A is a bad bitch who attracts a huge crowd and loves to throw bass in the audiences’ faces as she raps and gets weird on stage; that’s exactly what she did on Saturday night at the orange stage. She kept the crowd hyped the entire performance and went out on a bang with “Bad Girls”, where she grabbed a bunch of girls from the crowd to dance on stage with her.

Fred Armisen’s Cancellation –I have to admit I was a little too excited when I saw a flyer for Fred Armisen’s DJ set, especially after watching the Portlandia “Everyone is a DJ” episode. Needless to say, it was a total buzz kill Armisen didn’t end up coming through.

Lupe Fiasco - Lupe Fiasco’s actual fiasco on stage resulted in some bitter disappointment Friday night.  His performance literally fell apart in front of the audience. He seemed discouraged by a light drizzle where the lighting temporarily went out and he yelled “obviously, it’s the fucking torrential downpour none of us knew about” and things continued downhill. He got more frustrated on stage screaming out “Stay the fuck off my stage” and “Where the ladies at...well fuck that then”.  Then, after performing his hit “Superstar” he said, “this looks like a good place to end”, threw the mic down, and exited the stage 20 minutes early. It was the anti-encore.

The silver lining to the Fiasco was that I got to catch the tail end of Cut Copy’s dance party and their aesthetically pleasing light show at the Orange stage.

Festival season may have come to a close in most states, but it’s the perfect time of year for festivals in Austin, Texas with the moderately cool autumn weather. I’m happy to now be able to add Fun Fun Fun Fest to my list of local things to do during Austin’s fall festival season.