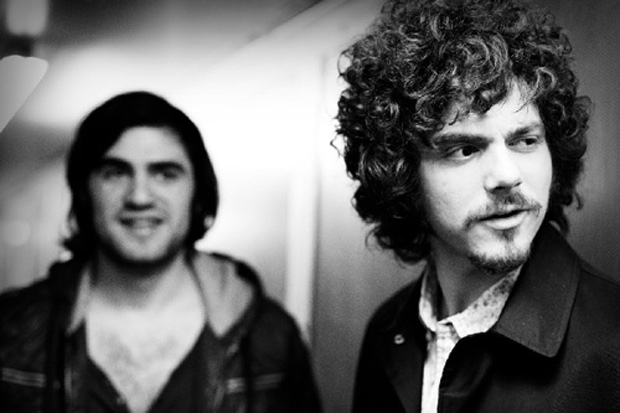 The new dons of nu-disco return with a wild-eyed take on their own track. French Horn Rebellion is brothers David and Robert Perlick-Molinari, and there's great evidence of good ol' fashioned classical training in their background. Namely, awareness of the 'french horn.' Today's adolescent producers probably think it's some sort of sex toy. And it probably is.

The duo has fallen in with a decidedly indie crowd, serving up danceable remixes of Two Door Cinema Club, Sleigh Bells, MEN, and more, and spending much of the month on tour with darlings of the scene Of Montreal. The brothers Perlick-Molinari have been dishing out their fair share of originals, and tomorrow (Dec. 18th), their newest offering sees the light of day.


Love is Dangerous features the original title track, along with this lovely gem and another remix from Chrome Canyon, which already got some blog buzz. Additionally, "Cold Enough" features R&B legend Jody Watley, with whom the boys have been spending plenty of time. Shalamar in the house--you bet. This is all part of the boys' plan to implement "Next Jack Swing," the logical progression that gives "New Jack Swing" some heavier beats and a modern facelift.

The title track gets a heaping helping of The Knocks' James Patterson. J-Patt's signature cool-as-ice vocals lilt gently over the pitter-patter of ethereal disco beats. Those vox are dashed against the rocks, splintering into a thousand microscopic pieces, only to be reassembled by FHR and buddy rekLES (NYC's Girls & Boys resident DJ). The trio patiently rehash the vocals over a framework of glitchy dropouts and little house breakdowns. The result? A fun and sexy take on an indie dance anthem in the making. French Horn Rebellion has worked its way into the industry and into playlists and iPods inside and outside the scene. Our guess is this rebellion turns into an all out coup d'état.