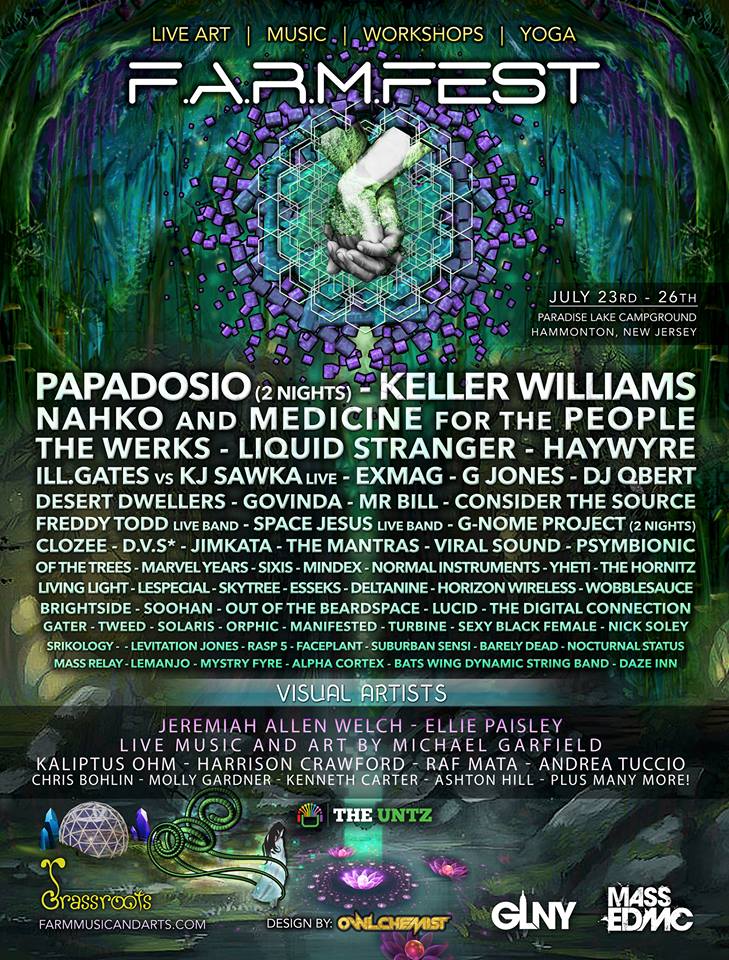 FARM Fest is unlike any festival I've ever attended. There is a certain vibe that occurs when you get so many like-minded individuals in the same vicinity. It's electric, the grounds are pulsing with waves of positive energy. There is a pure vibration radiating from this crowd that can only be described by experiencing it. FARM Fest resonates the frequency you want to be on, the frequency of the reality we all want to be on. For that brief moment in time, we are all equals. We all come out of our cages and become what we wish our society really was. The energy signature we carry that weekend will be echo and imprinted on us throughout our lives. This is what makes FARM Fest so remarkable, the glimpse we get at what society could be.

Not only is the festival overflowing with positive vibes, there is great music to top it all off, starting with headliners Papadosio and Keller Williams. Papadosio are figureheads in the jamtronica scene and will be headlining two nights. They are a staple at FARM now, and the show wouldn't be complete with out a proper set from the boys. Keller Williams has been a monumental part of the festival scene for years. Year in and year out he enriches lineups all over the country. It's always a pleasure to see him added to the bill.

Nahko and Medicine for the People is a group I have been dying to see. Their music seems to strike an inner chord that is rarely accessed. Hailing from Portland, Oregon they are promoting positivity and optimism unlike any other musical collective I know. Definitely worth a listen if you haven't already.

I would be remiss if I did not mention The Werks. This psychedelic dance rock group has been capturing the attention of many across the festival scene. The band incorporates tons of different styles into its set; there is something for everyone to get down to, from funk to jamtronica. Some other noteworthy jambands adorning the lineup are lespecial and SOLARIS. These two bands are overflowing with talent. I am willing to bet they will be the ones headlining in upcoming years. Their live shows are brimming with so much energy that it's hard not to get down. Make sure to check them out.

The lineup is stacked with a plethora of enlightened bass beings: G Jones, Desert Dwellers, Govinda, Mr. Bill, Sixis, Yheti, Skytree, SOOHAN, Esseks, Psymbionic, Of The Trees--the list goes on and on with awakened magicians and teachers. I'm especially psyched for Space Jesus' live band set. He is a master of the supernatural and wizard of the bassline. Seeing him with a liveband behind him will be like watching a sorcerer preparing his spells. This is not a set to miss. Check out his would be Hudson Project set.

The Ill.Gates vs KJ Sawka is going to bring a whole new level of ridiculousness to the FARM. Both well known face melters will be bringing the heat with a live, MIDI fighting, B2B set. Then to add Liquid Stranger on top of that, we are all in for a treat. The bass gods are with us.

Add to all of that, incredible visual artists carefully prepared and executed by luminaries in the field like Jeremiah Allen Welch, Ellie Paisley, Kaliptus Ohm, and more, and we're downright spoiled.

There is a certain level of consciousness that is attained by being a part of FARM Fest. This level was previously uncharted and your arrival there brings you through the wormhole. For that weekend we are no longer a part of society's rules. We make the rules, we live the way we want to live, there are no societal pressures here. It's a microcosm of what our lives could be and it's special to be apart of it.

The combination of art installations, awakened souls, workshops, sustainability and on point music makes this festival unlike any other on the East Coast, especially New Jersey.

Join us at FARM Fest's new location at Paradise Lake Campground in Hammontree, NJ from July 23-26.

Grab your tickets farmfestmusic.com and come see what it's all about.