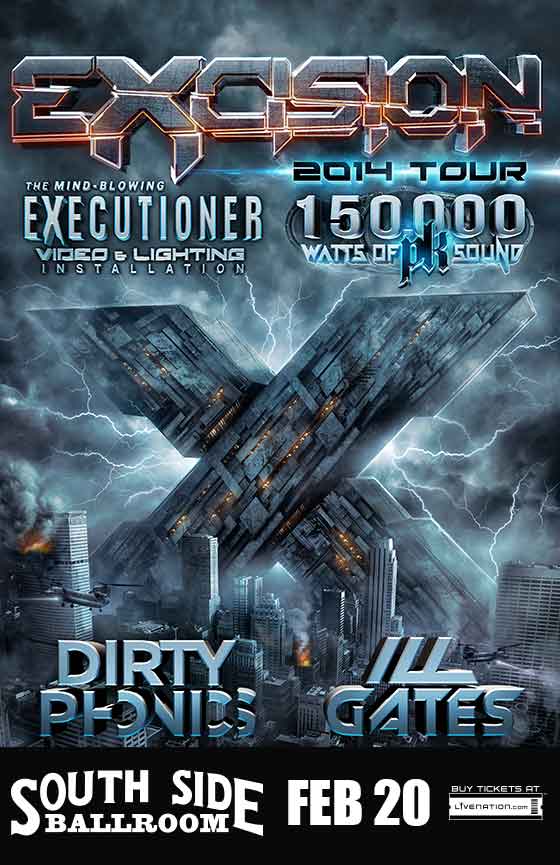 Throw your X's up! The god of bass, destroyer of worlds, Excision is storming into the Southside Ballroom in Dallas, TX on February 20th. With him comes the awe-inspiring spectacle that is The eXecutioner. Bringing a crushing 150,000 Watts of PK Sound, this show will knock the teeth out your gam-gam's mouth from across town.

Jeff Abel is widely credited for introducing a harder style of dubstep to the Americas. Along with fellow Canadian bass-peddlers Datsik and Downlink, Excision shook the world of Shambhala until everyone in the US knew the awesome power of the subsonic sound.

Joining Excision in DTX is French DJ powerhouse Dirtyphonics. The heavy trio with a rock 'n' roll edge made waves last year with the release of Irreverence on Steve Aoki's Dim Mak label. Mixing elements of metal and drum & bass with a ferocious live attack, this outfit is not soon forgotten.

Rounding out the bill is one of our favorite acts of all time. ill.Gates is a production powerhouse, able to blast out the grooviest glitch-hop, to the filthiest grime. A master of psychedelic journeys, Dylan is a frequent collaborator and longtime friend of Lorin Ashton, a.k.a. Bassnectar, and the two megaminds have a number of joints under their collective belts.

This powerful show is not to be missed. Grab your tickets now and buckle up, Dallas--it's going to get bumpy.