Now in its fourth year, the magic and wonder of previous incarnations of Envision Festival have driven anticipation for the transformational excursion on the beaches and in the jungles of Costa Rica each February. With a new location and a much higher profile for the annual blending of conscious music, visionary art, and spiritual enlightenment, this year's lineup has been the subject of much speculation. That being said, Envision delivered on a scale that make seekers and sonic adventures alike very, very happy February 20-23, 2014.

The lone name standing atop the lineup is reason enough to call off work and head down to Central America. After undergoing major heart surgery this summer, and only popping up at Burning Man for a legendary appearance, Dave Tipper makes his triumphant return to Envision.

The godfather of glitch-hop will be joined by three live acts who have made huge leaps and bounds in 2013. Live/electronic and jam hybrid Papadosio makes the inaugural trip to the beaches of Uvita with its blend of soaring melodies and inspirational words. On the inspirational tip, Nahko and Medicine for the People has blazed a path through the transformational scene with a winning mix of powerful music and calls for social justice. Sisters Chloe and Leah Smith will weave their instrumental talents with stirring vocals as Rising Appalachia brings the flavor of the mountains down to the ocean. 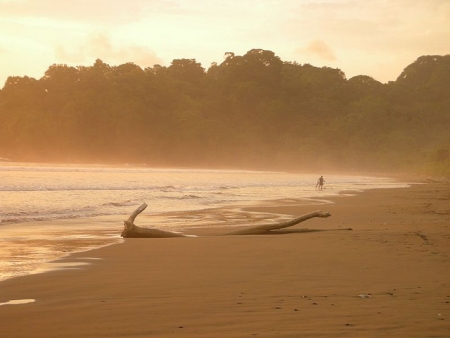 The psychedelic and sacred side of the subsonic spectrum will be well represented by festival favorites Random Rab, Phutureprimitive, Kalya Scintilla, Kaminanda, Andreilien, Liberation Movement, and The Human Experience. Glitch fans rejoice with the addition of The Funk Hunters, Pumpkin, Sugarpill, JPOD, and Stylust Beats. So many upcoming live, dub, bass, and mind-expanding acts have made the lineup, it's impossible to cover even a fraction of them. Rest assured, Envision has done its homework. They've covered all the bases with their sonic selections, and woven a beautiful tapestry of conscious acts.

And the musical lineup isn't the only highlight. How's four days in the shade sound? The festival is moving 5 minutes north from its 2012 and 2013 location. The new spread features tons of shade and a quicker walk to the beach (a couple of minutes, and no big jungle trek--unless you want to explore a bit).

The fine folks at Envision have assembled a stellar selection of tours, packages, and events before and after the festival. And stay tuned for more information about speakers, workshops, painters, and performers--we're getting excited about all the extras this event provides! Grab your tickets and VIP packages NOW at envisionfestival.com, and we'll see you down south. Pura vida!