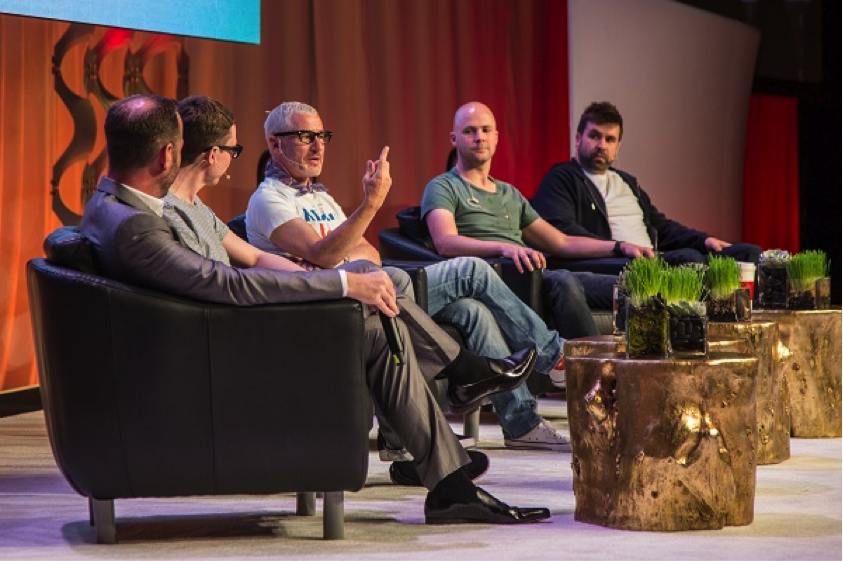 The Third Annual EDMbiz Conference & Expo—which took place this past week on June 17, 18 and 19 at The Cosmopolitan of Las Vegas—was the epicenter of industry and innovation for the EDM community.  Artists, promoters, agents, bloggers, investors, media experts and more from around the country and all over the globe gathered to share their knowledge, experience and overall thoughts on the state of the industry’s past, present and future.  To quote one of the conference’s keynote speakers, Bob Lefsetz, in his widely recognized trade newsletter, Lefsetz Letter (6/19/14), “Everybody here is young and involved and they want in, or further in…It's like either you're on the EDM path, or you're headed down the road to extinction…All the great rock thinkers. I wanted to tell them to book a flight and get here immediately, BECAUSE THIS IS WHERE IT'S HAPPENING!”

The conference kicked off Tuesday, June 17 with a nighttime club event at Drai’s Beach Club with industry pioneers The Crystal Method, who launched their career in Las Vegas over 20 years ago “before there was EDM,” per the duo’s Ken Jordan.  The following day, nearly a thousand delegates filed into the expanded EDMbiz Conference and Expo halls of The Cosmopolitan for two days of back-to-back panels, presentations and keynote speeches, hosted by Jason Bentley of KCRW.  Sean Christie, Managing Partner of Surrender, Andrea’s and Encore Beach Club, stepped in for keynote speaker Live Nation's James Barton (who was unable to attend due to family matters) and formally opened the two-day round of panels.  Other highlights from the conference included the ‘#20Something panel, curated by manager Jake Udell of Th3rd Brain Management (Krewella, Zhu), that focused on the brightest up-and-coming executives in the genre.

Nielsen’s Head of Branded Music Entertainment, Tatiana Oliveira Simonian, debuted segments of the study “Engaging The Electronic Music Listener,” an in-depth look at the electronic music consumer.  “Data is power,” said Simonian, as she discussed various graphs and charts which revealed a fascinating macro look at the state of the music industry.  According to Nielsen, the typical EDM fan is a millennial and more likely to have a multi-cultural ethnicity. The genre's fan base is 55% male and 45% female, with diversity all around.

On Thursday, June 19, badge holders returned to EDMbiz Conference & Expo for a more-artist-driven day of programming, with keynotes from top Global DJs Above & Beyond and Hardwell. Both artists were joined by their management and agents. Above & Beyond’s Paavo Siljamaki and Tony McGuinness dove deep into their massive success in touring (having sold-out Madison Square Garden in less than 24 hours) and innovation as an act, recently performing two benchmark acoustic shows for fans while Hardwell and his team discussed his meteoric rise. There was also the Third Annual EDMbiz Artist Panel, featuring a lively conversation between Steve Angello, Borgore, Carl Cox, Arty, Destructo, Carnage and Posso.

Attending EDMbiz connects people in the industry. A prime example of the great deals to be had was discussed in the 7Up case study. According to panelists, it was through a meeting at EDMbiz, marketing executives were able to meet with the festivals and representatives of the artists now featured in their current #7x7Up campaign including Ultra Music Festival, Electric Daisy Carnival, Tiesto and Danny Avila.  There was also a trade presentation from AFEM, an advocacy group which circles the wagons of many key executives in the field on many issues that involve the electronic music community.

Additionally, during the second day of the conference, EDMbiz presented their third annual “Leading The Way” Award—an accolade that recognizes creative philanthropy in the entertainment industry—to The Pablove Foundation.  The Pablove Foundation is named after Pablo Thrailkill Castelaz, who was six years old when he lost his valiant yearlong battle with bilateral Wilms Tumor, a rare form of childhood cancer. The mission of The Pablove Foundation is to fund pediatric cancer research and advances in treatment, educate and empower cancer families, and improve the quality of life for children living with cancer through hospital play, music and arts programs.  Past recipients of the “Leading The Way Award” were Burning Man and Coachella. For more information on The Pablove Foundation, please visit pablove.org and follow Pablove on Facebook at facebook.com/pablovefoundation and Twitter at @pablove.

Also during EDMbiz, Insomniac CEO and Founder Pasquale Rotella took time to complete a live Reddit “Ask Me Anything” (AMA).  Over the course of his two-hour session, he addressed a multitude of topics including the possibility of EDC returning to Texas, his duties preparing for EDC this week and DanceSafe.  Overall the AMA drew over 350+ questions for Rotella, who indicated he would return to answer as many of them as he could.  Follow the thread here

This year’s conference drew fewer concerns about a "bubble" or "correction" in the EDM economy than previous years.  Also discussed were the continued misgivings about the relevance of the term EDM. Most agree that it's useful on the business side, but it doesn't work on the culture side. When asked, artists seemed to take no issue with it as a "welcome banner" to the masses, but wouldn't actually describe themselves as EDM artists.  Taking chances on thinking differently was also a recurring theme. A number of successful industry leaders talked about boldly sticking with a different idea/approach, but cautioned that you have to be prepared to risk everything.

Look for details regarding the EDMbiz Job Board launching soon at: http://www.edmbiz.com/category/jobs/. It is designed for people networking at EDMbiz and for students who come and want help finding their job in the EDM space.

EDMbiz Conference & Expo will return in 2015.