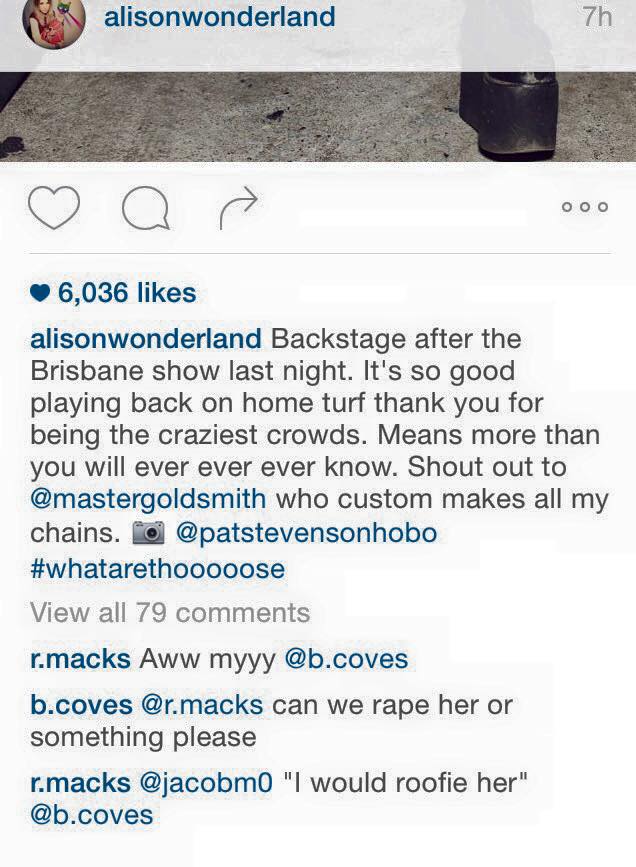 Rising Australian star Alison Wonderland earlier today fought back against sexually abusive speech that appeared on her Instagram feed shortly after she posted an innocuous backstage photograph. The producer and DJ, born Alex Scholler, made a short statement via Facebook highlighting the gross nature of these types of comments, regardless of the intention behind them.

Yo I wouldn't usually call people out but I feel like this time it is important. Last 2 comments. This is not ok. Ever. I don't care if it's a 'joke'. Not. Ok.

Fans quickly rose to her defense, causing a bit of a stir on the internet today. Since her loyal base took to flaming not only the perpetrators themselves, but also friends and family, Wonderland has asked that the online retribution be limited to those responsible for the hateful comments. The original commentors have since taken down their social media profiles.

Recently, CHVRCHES frontwoman Lauren Mayberry made a plea to fans and the rest of the music industry to stop the online barrage of abusive speech towards female artists. The proliferation of social media and the effect of anonymity culture has brought the issue up numerous times in recent years, again notably following a post from Krewella's Jahan Yousaf.

Alison Wonderland will be performing at HARD Day of the Dead in southern California at the end of this month, and at EDC Orlando early next month.