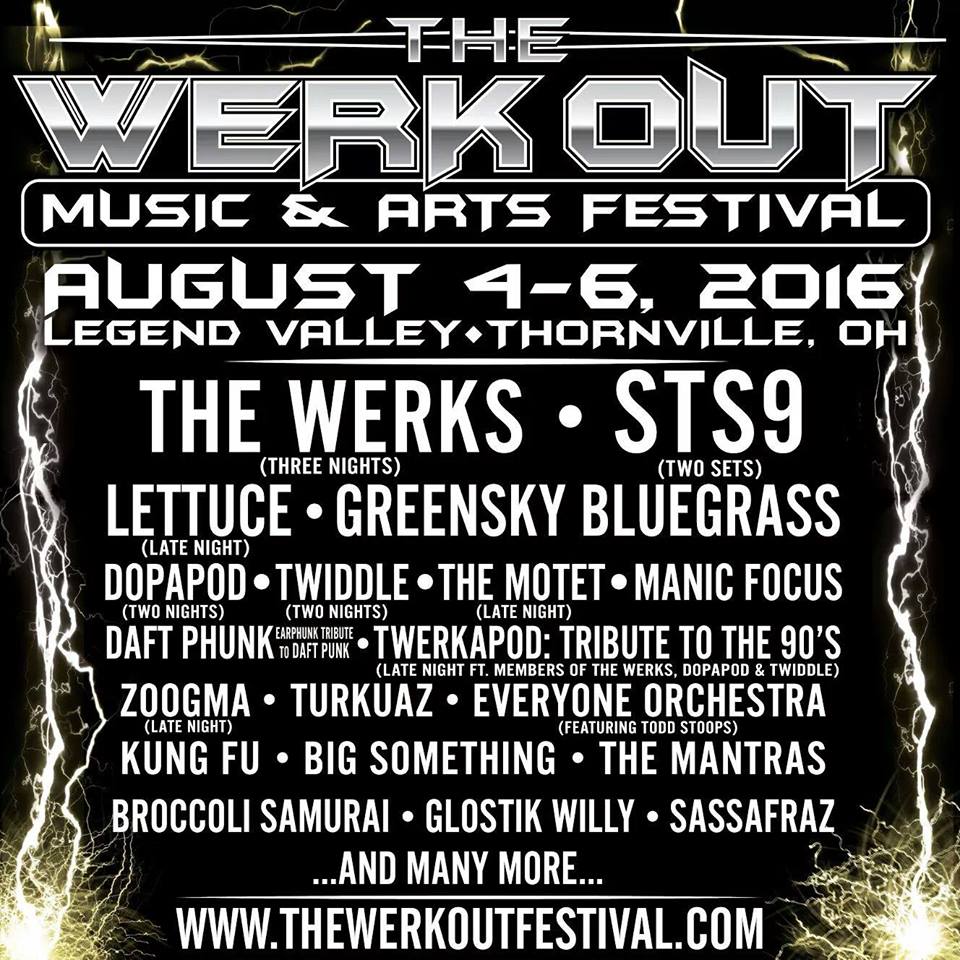 The Midwest is becoming a true mecca for music festivals of all sorts. Ohio itself has become paramount, boasting numerous festivals throughout its 45,000 square mile terrain. In its seventh year, The Werk Out Music & Arts Festival has become one of the state’s and even the Midwest’s most popular gatherings, constantly growing in power and attracting music lovers from all across the nation.

Ever since its inception, The Werk Out has been one of the best places to catch the hottest up and comers in the jam and electronic world. Based around Ohio “psychedelic dance jam funk rock” band The Werks, the festival itself is the epitome of musical paradise. The Werk Out always showcases top tier musical quality, but with the size and atmosphere of a small, close knit festival.

Sound Tribe Sector 9 is livetronica at its finest. The five-piece from Atlanta, GA has been constantly providing both the jam and electronic scene with the best live shows around, appearing close to the top of the bill at nearly every festival they perform at. Their 2016 schedule has already seen them play for huge crowds at Electric Forest, Camp Bisco, and Summer Camp, so its two intimate sets on Friday will be nothing short of stellar. 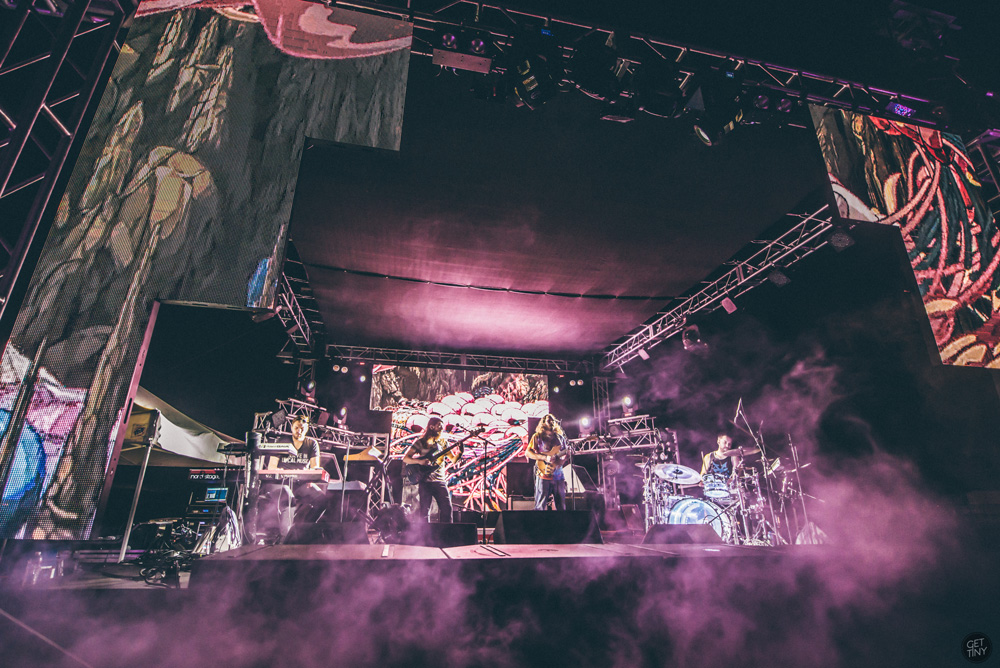 It’ll be impossible to miss out on the music of The Werks when you’re in attendance. Performing all three nights, these guys always put on some of the most memorable sets of the festival; combining new songs, classic tunes and excellent covers, all for their loyal fan base. We can’t wait to hear some surprises and see some great sit-ins.

Back for their second Werk Out in a row are the Boston funkateers in Lettuce. The eight-piece brought the side stage down during the early evening last year, so we’re stoked to see what they do with their late night set in the Big Tent on Thursday.

The best bluegrass from the north, Greensky Bluegrass, will be making their first Werk Out appearance since 2012. Coming off a recent sell out Red Rocks headliner with Leftover Salmon, this progressive quintet’s main stage set on Saturday night will only further their summer of fire!

Also joining this diverse lineup for the fourth year in a row is Werk Out favorites Dopapod, performing a sunset set on Thrursday and an early evening set on Friday. Last year’s sunset set was a magical one, while their late night tent set had the festival dancing hard into the AM. Along for their first Werk Out will be Twiddle, performing both Friday and Saturday. These guys have been moving their way up the ladder in the jam world and it is no question that their performances will be spectacular. These two bands will also be joining The Werks on Friday for a late night party full of 90’s covers. The Motet will also be bringing their danceable funk to the late night tent on Saturday for their first Werk Out.

We all know that the above headliners and national touring acts are a must see, but who are some of the other up-and-comers as well as regional acts that need to be witnessed at The Werk Out? Make sure to pack a few extra beers and don’t leave the stage for these extremely talented acts spread out across the multiple stages at Legend Valley.

Hailing from Columbus, OH, Sassafraz is back for their third Werk Out. These funky rockers are festival favorites in Ohio, with high energy sets full of dual guitar shredding, solid bass grooves and lyrics that you can’t help but sing along to, even after hearing the chorus just once. They’ve shared the stage with The Werks many times, as well as with Dopapod, Galactic, and Snarky Puppy, so be sure to hit up their Main Stage set on Friday for some good ol’ Ohio funk.

Also bringing the funk for their third Werk Out will be Connecticut’s Kung Fu! This insane quintet combines jazz, electronica and funk to create an explosive sound that you can’t keep yourself from dancing to. Though they are opening the Main Stage early on Friday, attendees will definitely be at the stage grooving in the early afternoon.

Traveling all the way from Atlanta to bring their livetronica to the masses is Higher Learning. Making their first Werk Out appearance, this spacey group combines digital electronics with pure analog keyboards, guitar and percussion to create a sound enjoyed by lovers of both the jam and electronic worlds. Continuing their impressive 2016 festival list, their Friday night set in the Big Tent needs to be heard.

From Cleveland, OH, Broccoli Samurai has been quickly expanding their reach around the nation over the last two years. Making an impressive sixth return to The Werk Out, their extraordinary jamtronica sound and vigorous live show explains why they keep getting asked back year after year. Don’t sleep through their early Main Stage set on Saturday because these guys could be the next big thing!

After a phenomenal Main Stage set last year, Cleveland based Tropidelic is back for their second year. Combing reggae, funk and hip hop, these six-piece is an Ohio favorite, touring extensively throughout the stage as well as along the East Coast. One of their members even recently stirred up a little fun at RNC, so you can be sure that they’re side stage set on Friday will be a memorable one.

The originators of “Hippie Metal,” Glostik Willy truly knows how to shred. Making their fifth Werk Out appearance, the Indiana trio has built up a huge fan base in the area that rages front row to every song, from afternoon shows to sets that stretch until very early in the morning. Performing an afternoon Side Stage set as well as a Big Tent show that will most likely go until the sun comes up, bring out your devil horns for both of these blistering displays of rock n’ roll power.

With diabolical keyboard sounds, funky grooves and exciting beats, New Orleans based Earphunk knows how to create a dance party. It’s only proper that the quintet would bring their unique dance party to the Werk Out for their first time with their unique tribute to Daft Punk. The group has only performed this set a handful of times, so their late night Big Tent set on Saturday needs to be seen both for its rarity and its organic creativity.

After putting him at the number one spot on our acts to see at Paradise Music & Arts Festival earlier this year, John “JmaC” McCarten and friends definitely didn’t disappoint us with the Manic Focus Live Band set. One of the few “EDM” acts at the festival this year, JmaC and drummer Jake Barinholtz have some big shoes to fill when it comes to getting the festival dancing to their funky, soulful electronic sounds. Thursday evening at the Side Stage will be the place to be; so don’t be afraid to come get down.

Another band that is no stranger to The Werk Out, Nashville based Zoogma and their brilliant livetronica are making their fourth return to the festival. This quartet blurs the lines between rock music and “EDM” with their outstanding originals and remarkable live remixes and mashups. Performing on the Side Stage right before the almighty STS9 on Friday night, you can be sure this talented group will be able to warm up your dancing shoes.

Rounding out our list and making their first Werk Out appearance is Brooklyn based Turkuaz. Keeping the funk alive, the nine-member group is always a sight to behold. With sultry vocals, a duel sax section, driving guitar sounds and an infectious groove, it would be impossible to not dance to their music, even if you tried. Bringing you the best sounds from the 70’s up until now, Turkuaz will have The Werk Out lit up during their Thursday evening Side Stage show.

Tickets can still be purchased thewerkoutfestival.com and will be available at the gates. Don’t miss out on your chance to get down at one of the best festivals in the Midwest!