Texan (now Brooklynite) Tibaut Bowman is so jazzed to make his triumphant return to Chicago following a stunning Wicker Park Fest performance earlier this summer, that he's decided to put out yet another indie-electro banger just for you! Why is he so excited? Perhaps it's because DJ Thibault is opening for Wolfgang Gartner and SBTRKT at The Mid on Friday, Sept. 2nd, as part of an official North Coast Music Festival after-party. He'll also be hitting the Magic Hat Stage at NCMF at 4pm on Saturday.

The stunning follow-up to his first original, " Air Jaws," which appears on TheUntz.com 2011 Digital Music Sampler, is as meaty as the story upon which (I hope) the song is based. In Saki's (Burma-born British writer Hectro Hugh Munro) The Interlopers, two Carpathian landowners are crushed beneath a tree branch, allowing the mortal enemies to understand their commonalities, put aside their differences, and agree to end their families' centuries-long feud. That is, right before they get their faces ripped off by wolves.

Tibaut's "Interloper" is speckled with that irresistible kick, the sound of a ball peen hammer striking balsa wood. The rough splat undergirds a layer of bit-crushed synth chords that sound like they were stripped from a Neo-Geo arcade fighter. Washes and drops propel the driving electro cut, bringing the intensity to a fever pitch before ripping the rug out from under the audience's dancing feet. Beware, gentle North Coasters... the wolves are coming. 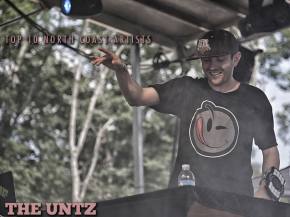