Published: March 15, 2013
After a mammoth 2012 which included his debut OWSLA release Something, Something, Awesome and a worldwide multi-leg debut headlining tour, Moombahton impresario Dillon Francis is keeping 2013 rolling with his "Wurld Turr" this spring.

The 21-city, three-country tour featured a front-half with Chicago trap kings Flosstradamus, and the back leg kicks off with LA dark disco duo Oliver. Dillon's effortlessly meticulous take on moombahton coupled with an unparalleled sense of humor (his DJ awareness video has led many down the road to Taco Bell) has pushed him to the forefront of the electronic music world, both critically and popularly. His rise to prominence has only been solidified by MTV recently dubbing Dillon as one of “Clubland’s Artists to Watch in 2013.”

Tickets are available via http://dillonfrancis.com/tour 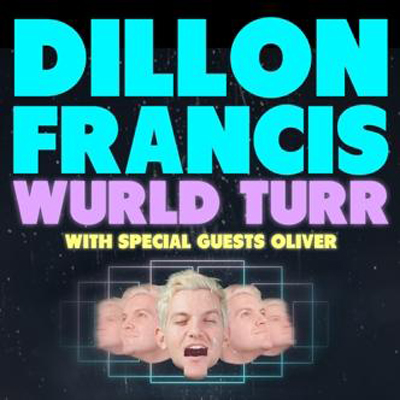