The bass is set to drop at the historic Congress Theater on March 8th. This time, React Presents have queued up beats for you by a collective notorious for shutting it down. Join Flosstradamus and Dillon Francis, as they team up once again for an evening of an amazing night of trap, electro, and moombahton.

For years, the Chi-City duo, Flosstradamus, have sat at the forefront of the scene. Hitting each set with guns blazing, the duo has been able to bring extra-hype to any and every set for close to a decade. Expect J2K and Autobot to flip some of your favorite tracks in ways that set them apart from the rest. Most recently, the boys teamed up with Iggy Azalea and hip-hop veteran Juicy J teamed up to bring you all a sound that is sure to run the trap.

With a strong rep of working with some of the game’s most talented players like Steve Aoki, Diplo, and will.i.am, LA-native Dillon Francis has consistently set himself a part from the plethora of young electronic musicians that have hit the scene in recent years. The versatile producer has got a sound that is oozing with the sweet sounds of Moombathon and Lovestep. Most recently, Francis brings you “Something to Die For,” which is sure to shut it down at the Congress. 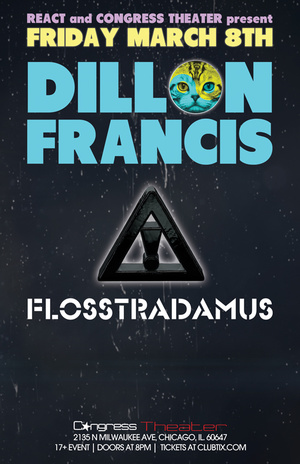 Tickets are available now at Clubtix.com!