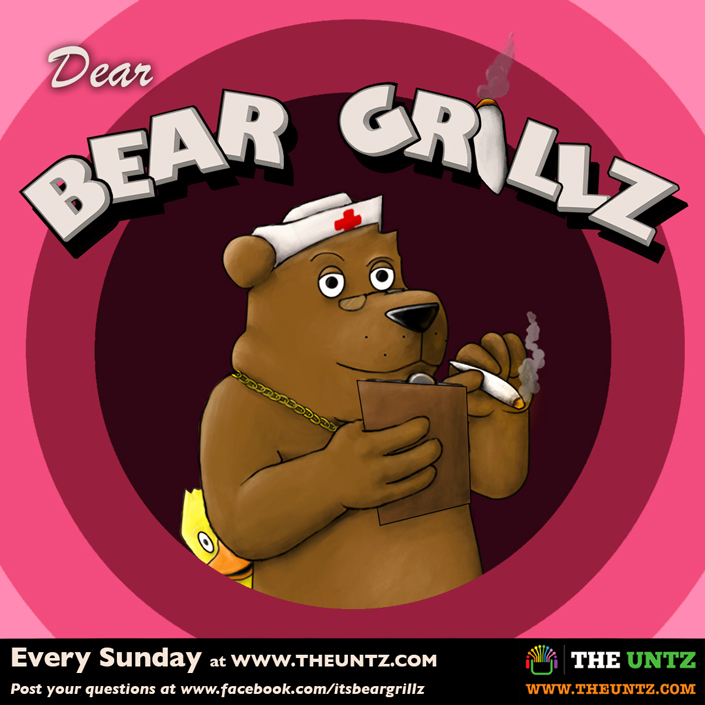 We took a couple of weeks off to hibernate, but we're back with the second installment of our new, weekly series Dear Bear Grillz. For the uninitiated, Bear Grillz is a 28-year-old bear from the depths of Yosemite. We ripped blunts with the young producer, and decided to give our fans a chance to interact with a furry producer who may or may not eat them.

We're also thrilled to announce Bear Grillz will be releasing a brand new cartoon and video in the coming weeks!

Can bears really smell menstruation? (Will Martin, via Facebook)

I had a friend who claimed he could. The other day I went over to his trailer for dinner with Jennifer Aniston, Excision and a wasp called Richard Snickers. My buddy was excited because he'd just bought 'Hungry Hungry Hippos' from a yard sale and he wanted to make a night of it. For dinner we had, what my buddy calls, a 'Burbank Pocket' which is basically a dog that he's fished out of the bins behind the vets and stuffed full of eggs. It's fucking delicious. I can't recommend it enough. Hope this helps.

Hey Bear Grillz, how do i make money? (Kevin McGuire, via Facebook)

That all depends on the work you're willing to put in. Here are my top 5 get rich quick suggestions:

1. Sell your organs to the black market
2. Make Dubstep
3. Find an old person with dementia and get them to change their will
4. Make EDM
5. Claim to be the second coming of whichever deceased religious leader has the most influence in your local area

I've run out of food in the cupboard, any suggestions? (David Porter, via post)

Have you ever licked fungus off the chimney of a brothel? It's not an ideal meal but it certainly keeps the wolf from the door. You're probably never going to see Jamie Oliver do it but it's worth a try if you fancy mixing it up a bit.

What's the best way to deal with this pesky marmot in my front yard? (Cody Comparato, via Facebook)

Marmots barely know what day of the week it is. If you’ve ever tried to have a chat with one then you’ll know what I’m talking about. I once met a marmot who’d spent about $4,000 on tennis shoes. He can’t even fucking wear them.

To be honest I'd just suggest it sticks its head in a microwave or has a bath with a toaster, they're so fucking stupid that ought to work.

Get your questions in to Bear Grillz by 6pm PST on Sundays at facebook.com/itsbeargrillz. Don't tell him where you live. Please.