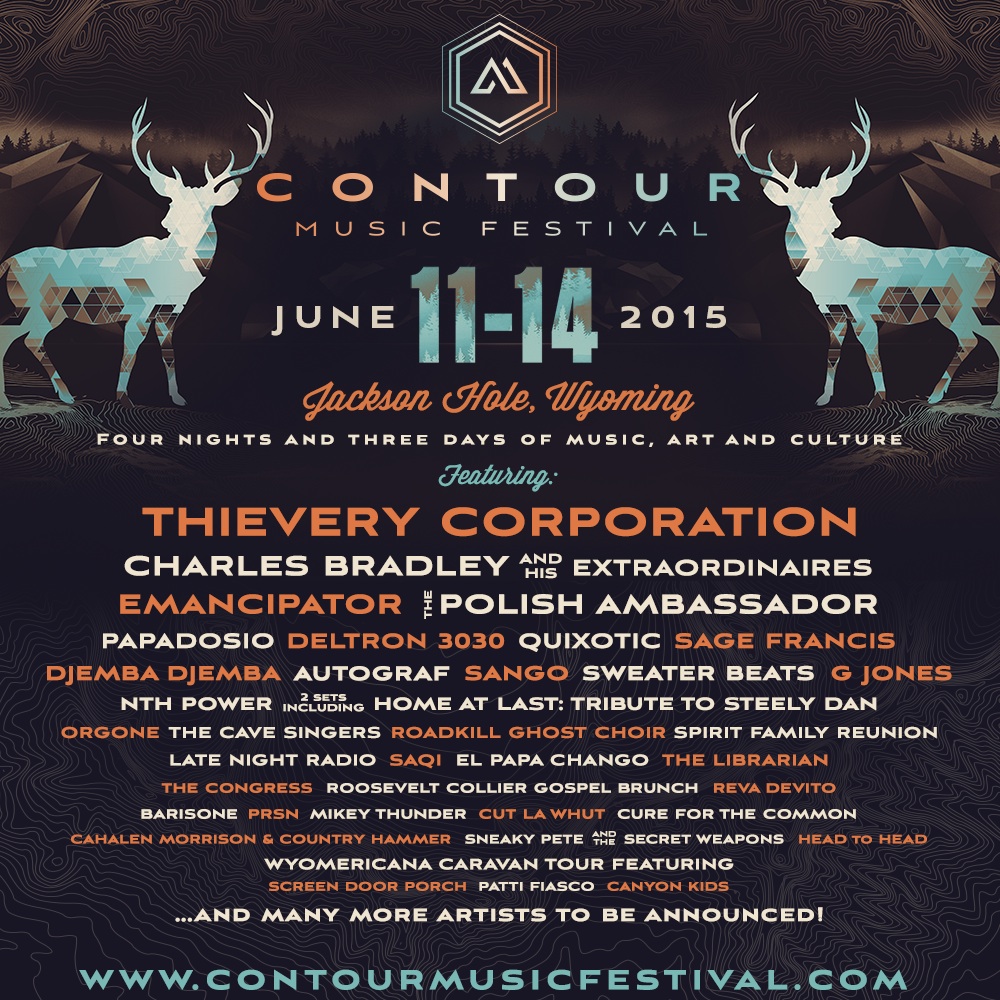 From June 11-14, 2015, the town of Jackson Hole, Wyoming will host the debut of a festival promising you three things: An intimate, innovative and elevated experience.

Tucked away in one of the most popular US destinations for mountain biking, fishing, white water rafting and thrill-seeking, the first-ever Contour Music Festival will bring four nights and three days of music and adventure to the scenic Teton Mountain Range.

Topping the line-up is multi-genre chill-ectro band Thievery Corporation, lead by members Rob Garza and Eric Hilton. From funk and jazz vibes, to experimental, to traditional/exotic world music, to extensive jams—especially in the live setting, Thievery is not to be missed.

The chilled-out beats of Doug Appling, better known as Emancipator, earned him a headlining spot along with “the world’s funkiest diplomat,” The Polish Ambassador.

A rare appearance by Deltron 3030 is also guaranteed to impress. The trio consisting of turntable guru DJ Kid Koala, producer Dan “The Automator” Nakamura and lyricist Del the Funkee Homosapien, are known for spanning countless genres within their experimental rap style, and are notorious for being one of the most iconic underground hip-hop groups ever.

The rest of the lineup is dotted with numerous other popular and on-the-rise artists, such as Papadosio, Djemba Djemba, Sango, Quixotic, G Jones, Sweater Beats, Late Night Radio, saQi, Mikey Thunder, and The Librarian to name a few.

Contour Fest’s Main Stage is nestled at the base of the “locals’ hill,” which serves as an ideal place for viewing performances whether you like relaxing in the grass or slowly pushing your way through the crowd in hopes of reaching the rail. The Main Stage is all ages, and solely “Main Stage Passes” are available.

However, if you want to enjoy all of the artists this weekend has to offer, a 21+ “All Night Long Pass” is your golden ticket. Venues scattered around Jackson Hole will be open to these late night pass holders only. Since crowd size is limited in some of those places, a “1 in, 1 out” rule will be in effect once capacity is reached.

Do not fear! If you want a guaranteed spot into any of the late night venues, the VIP “Peak Pass” is for you. Included is access to exclusive VIP lounging areas, 10 drink tickets for the main stage, event poster and more.

With more artists to be announced and June steadily closing in, don’t hesitate to grab yours before it’s too late. Head over to contourmusicfestival.com for tickets and more details.