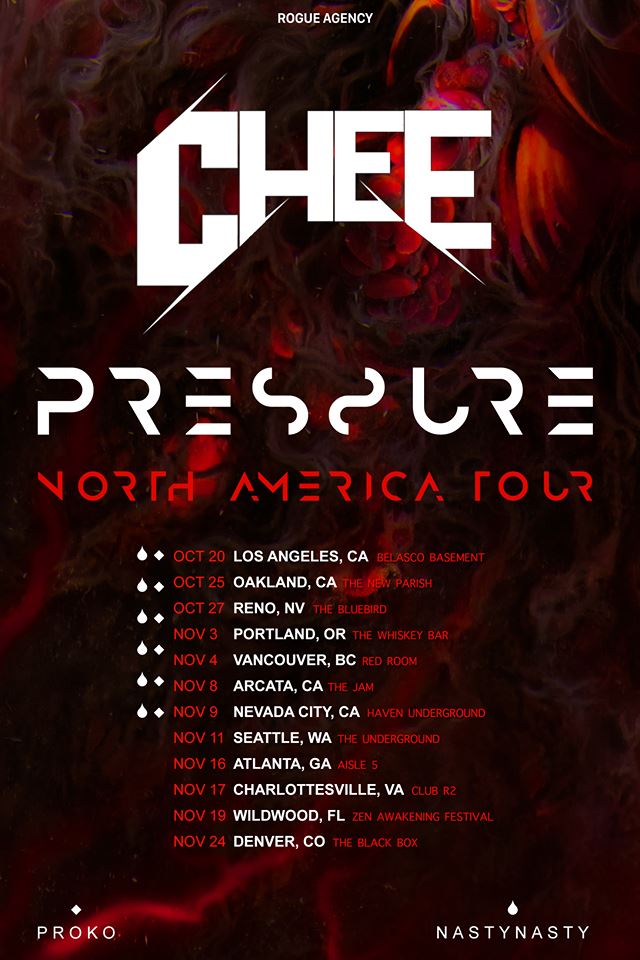 Excitement is building for the Stateside debut of breakout South African bass star Chee. Coming off the massive release of Fearmonger back in February, Bassnectar dropping “Genesism,” a slew of originals and collabs, and the most recent drop of G Jones' “Get Hot” remix, fans in America are starting to go a little nuts waiting for the beat chef to touchdown for his Pressure tour later this month.

The track of the same name drops today. “Pressure” is a snarling, brooding banger with halftime elements and a real sinister klaxon that sounds the alarm that something wicked this way comes. Hopefully Chee isn't feeling the 'pressure' with all the buzz surrounding his arrival in the United States, but I guess it'd be hard not to get those butterflies thinking about all the rabid bass junkies ready to pack out his sets.

Much of the tour overlaps with the Mutant Sound tour, featuring NastyNasty and PROKO, as well as The Fifth Pupil, Bleep Bloop's tour. Dates in hotspots like LA, Denver, and Atlanta, await, as well as Zen Awakening Festival in Florida. The Untz is hosting a standalone date with Chee in Charlottesville, Virginia on November 17th featuring The Untz Festival alums Moniker, as well as Mr Jennings, Tre Justice, and be.IN B2B dutch.

OK, Chee—if you weren't feeling the pressure before, now you certainly are. Catch him on this big North American tour and make sure to keep an ear out for this new album we hear is on its way.