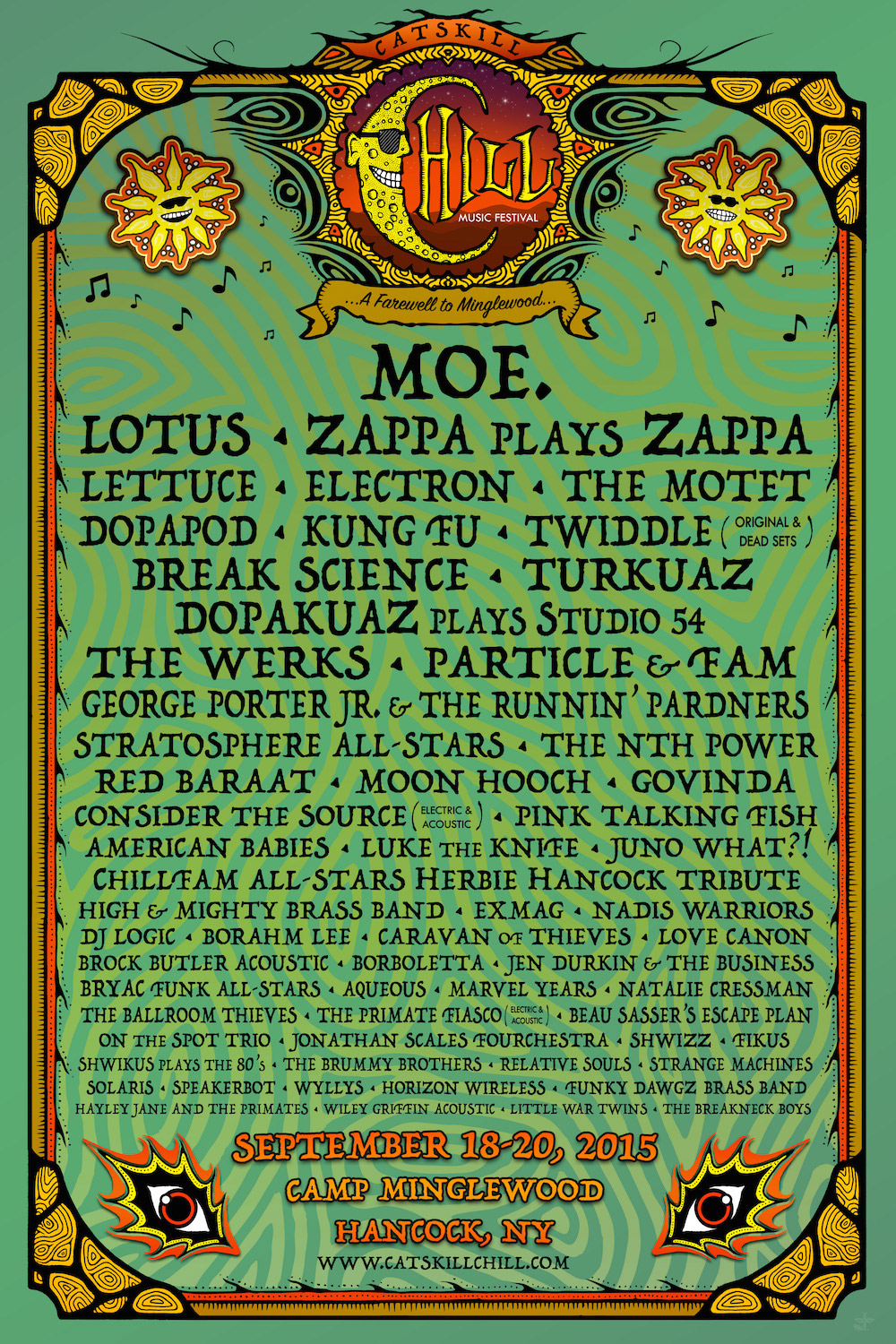 As the end of the summer season is rapidly approaching, one festival in particular looms large in the hearts and minds of fans in the northeast, Catskill Chill. The long-running jam festival is saying goodbye to Camp Minglewood, the sacred ground where the festival is held, from September 18-20 in Hancock, NY. This festival is that special one you tell all your friends about as soon as you get home. It’s the type of festival that makes you forget about everything else going on in your life. It’s not just the people that attend or the killer music that radiates all week. It’s the grounds.

Camp Minglewood is a sleep away camp. This place is arguably the best venue for throwing festivals. There are cabins scattered throughout the grounds, gravel pathways leading every which way, an entrancing lake, multiple stages in clubhouses with some bleacher seating and plenty room to dance. The Farewell to Minglewood will surely be bittersweet journey.

I’m not sure if it’s because Catskill Chill is the last festival of the season for most people, or if it's the vibe emitting from the grounds at Minglewood, but there is something different about this place. It’s all love all the time. Smiles everywhere you look. A “strangers stopping strangers just to shake their hand” kind of place. Catskill attendees get this little window once a year when we can let go and be our true, weird, awesome selves.

They have assembled a lineup to give those grounds the proper adieu. Catskill staples like Dopapod, Particle, Kung Fu, and Lettuce. They are also bringing back some older friends like Lotus.

Lotus is one of those bands that are always fun to see live. They have influenced countless other acts with their instrumental electronic jam band feel. I might even go as far as to say they are one of the pioneer jamtronica acts. If you are unfamiliar check out "Blacklight Sunflare" and get your learn on. Might even recommend you check out our Top 10 Lotus Songs list to get a full education.

The Werks are another noteworthy electronic jam band on the roster. This past summer they conquered the festival circuit like Genghis Kahn conquered Asia. Coast to coast they have been rocking festivals. They are fun and easy to groove to, definitely a set to check out! Moon Hooch is another one of those groups who are wooing and impressing festival crowds across the nation. This three-piece creates “cave music” or in other words, dance music with brass instruments and a drummer. They construct a sound that is unparalleled in the scene today. It is a refreshing take on modern dance music with builds and drops that leave the crowd awestruck.

Break Science are Catskill Chill natives, without them it wouldn’t be a true Chill. Borahm Lee and Adam Deitch display their expertise vividly in their impressive live dance act. Last year we had the pleasure of the dudes from Lettuce joining them on stage. A new act getting added to the roster is, Govinda. He is an artist for whom I have tremendous admiration. His combination of world bass music combining instrumental pieces will leave your jaw on the floor. Picture a psychedelic trance landscape with bass drops and grimy grooves that’ll have us moving our bodies in ways we never thought possible.

Enriching this lineup are the legends Electron. This super group consists of Marc Brownstein and Aron Magner from the Disco Biscuits, Tommy Hamilton from Joe Russo’s Almost Dead/American Babies and Mike Greenfield from Lotus. It’s insane the amount of talent that can be stacked into one band. These guys first emerged in the early 2000’s and now all their bands are huge figureheads in the festival scene. Electron does a slew of covers as well as a bunch their own takes on Disco Biscuits tunes. Their jams go on long arching paths, with addicting familiar grooves. What’s not to love? The day they play is going to be the real party. Here is the video of last year’s Catskill Set.

Catskill Chill is all about the love for music and the wonderful scene that we are a part of. As a collective ChillFam we will be saying goodbye to our second home, Camp Minglewood. We are going to say farewell the best way possible with the best music possible by enjoying multiple genres across multiple stages with Catskill natives. We are traveling to New York that weekend in September to celebrate one of the most memorable festivals on the east coast and the beloved grounds where it was held since its inaugural year. We will be sending off Camp Minglewood the best way possible, the only way we know how, by getting down for another three days in mid-September.

Visit catskillchill.com for more information, and to grab those tickets. Say goodbye in style!