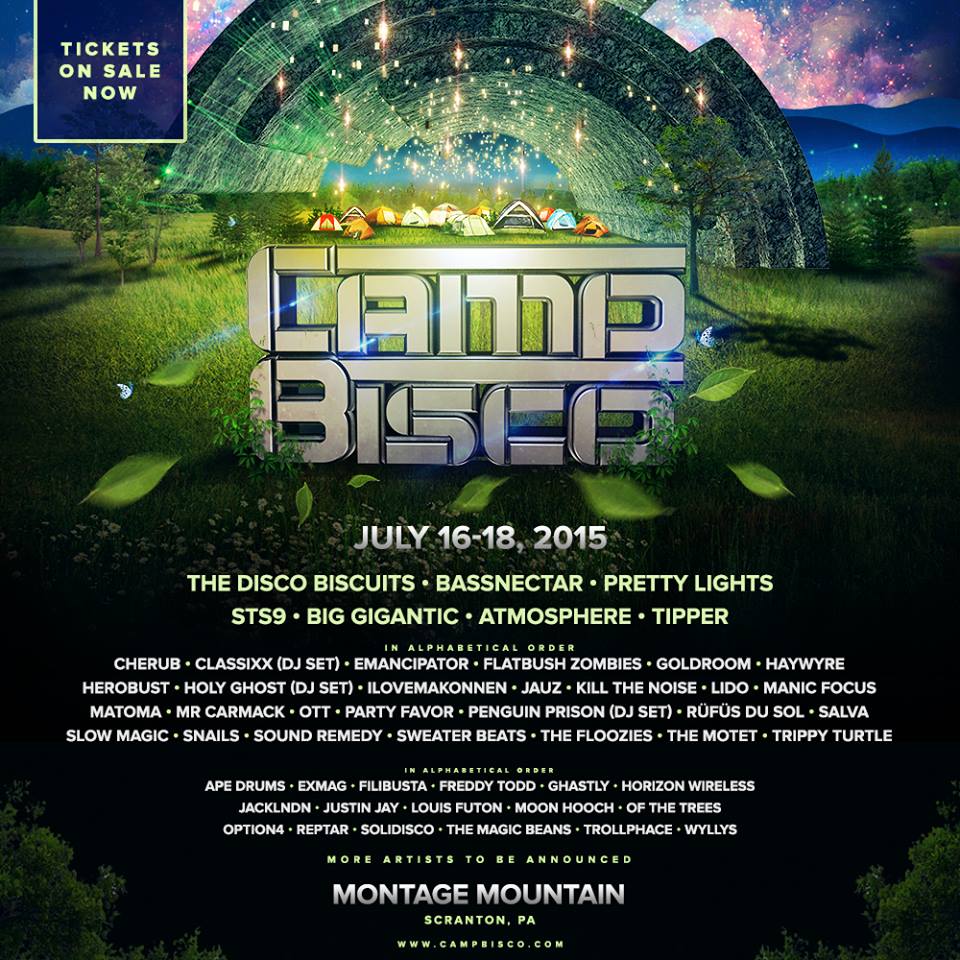 Some of us doubted it would ever return, others knew they would stay true to their word. Regardless of what you thought, we all won. Camp Bisco is back and it's back with a sense of retribution. They are making up for the one year hiatus and couldn't be doing a better job. Some would disagree but the return Bisco got the recipe just right. The perfect amount of balance between jam bands and dance music.

What makes Bisco a different breed is the crowd. We are a different type of person. There is no middle ground. We go from 0-100. It's all or nothing. There is no force comparable the madness of Bisco kids. From The Disco Biscuits die hards to the Lorin's Bassheads, we are all there to rage for 3 days straight.

The Disco Biscuits will be laying down six sets throughout the weekend. Make sure you check out at least one! (It should be more than that.) I mean it is their festival. You'll be doing yourself a favor as they are conquerors of the jamtronica scene. Check out this killer sunset jam from the 2013 Camp Bisco, it's unbeatable.

The basslord himself Bassnectar coupled with our main man from Denver, Pretty Lights adds to how outrageous Bisco is out going to be. Both of these guys constantly are doing the festival circuit, performing their own weekend runs and headlining shows all over the nation. Getting them on the same bill is a ridiculous treat for all bass fans alike. In short, BassLights at Bisco is going to be straight up insane.

An unmissable act is Tipper, hailing from England and taking the US by storm. His visuals are unparallelled, his turntablistism some of best and his beats have been known to mesmerize crowds. Here's a monster track from his downtempo Fathoms EP.

There are so many good bands on this lineup, too. Papadosio, Twiddle, Tauk, and STS9 all deserve some recognition. They are all killer musicians and will be putting on unforgettable shows that'll have us kicking up dust and getting down. Moon Hooch is a three-piece band with 2 saxophonists and a drummer. They emulate dance music via brass wind instruments and they do it extremely well. Definitely check out their set.

If bass is what you crave, bass is what you'll get at Camp Bisco. With the likes of Big Gigantic, Kill The Noise, Manic Focus, Mr. Carmack, and Salva we will not be lacking in low end of the spectrum. One of the acts I'm most looking forward is Snails. I will finally get to see some vomitstep live. Check out the ridiculousness of this track called "Murda Song." It's obnoxious in the best way possible, people are going to go wild.

If you come to Bisco, go big or go home. Get lost in the mania, it's what makes Bisco so great. You go hard, rage your face off and make friends while doing it. Come in with an open mind, your dancing shoes and plenty of sleep!