Love him or hate him, you can't deny Borgore has got some big brass ones. The Israeli producer, rapper, and DJ who claims to have ruined dubstep took a chance at ruining his own reputation in the industry and with his fans when he decided to undertake a bold social experiment. A few months back, he recorded his smash hit single "Decisions" with a certain Ms. Miley Cyrus (now, Mrs. Liam Hemsworth). The young actress and singer who just hit 10 million followers on Twitter, used to be the billion dollar star behind Disney's Hannah Montana brand, and is one of the most recognizable names and faces in today's pop culture paradise, actually went uncredited on the song, at first. Letting Asaf Borger's millions of fans get used to the pair's co-mingling voices for a bit, Cyrus let it slip via a Tweet that she did in fact lend her vocal talents to the single. What followed the revelation was a slew of fans of both parties expressing shock and amazement at the duo's collab.

Borgore and Cyrus reignited the controversy by appearing in the video for "Decisions," which premiered last week. Full of sugary treats, as one would expect from the song's tag "bitches love cake," the video suggests the 19-year-old pop icon is all grown up, hanging with the bad boy of bass, and some party animals--literally, a party goat, if you will.

I got a chance to talk with Borgore on The Untz Podcast about working with Miley, the video, and the decision (pardon the pun) to keep her vocal contribution a secret. The interview gives fans a glimpse of Borgore's mindframe when they were shooting the video last month.

So this puts Borgore fans in a bind. Do they go with it? Admit they can get down with a former Disney princess, or turn their backs on their beloved raunchy rapper? Miley Cyrus fans seem to be loving it, so we can't imagine Borgore is losing much sleep over his mad scientist antics. In the end, one thing is for sure--good tunes is good tunes, regardless of who's got a hand in it. Just shut up and eat the cake. 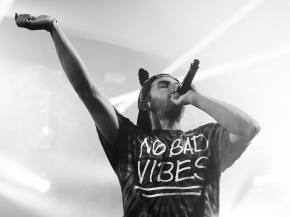