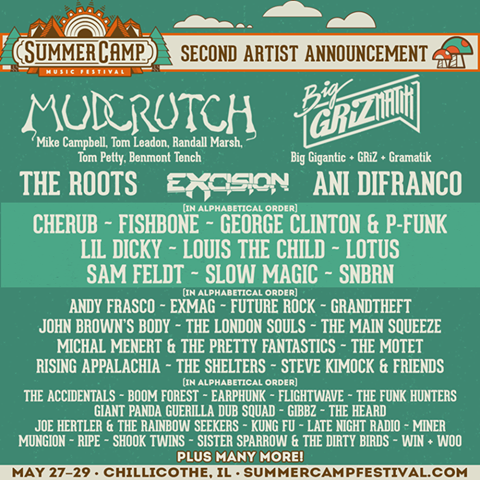 The highly touted trifecta of future funk is reassembling at SCamp. Big Gigantic, GRiZ, and Gramatik join forces once more for BIG GRIZMATIK, which has made rare appearances at Electric Forest and a previous Summer Camp Red Barn extravaganza. They are joined by bass lord Excision, as well as Lotus, Louis The Child, SNBRN, Slow Magic, Exmag, Future Rock, and Michal Menert & The Pretty Fantastics, among others.

On the non-electronic side, Tom Petty & The Heartbreakers predecessor Mudcrutch will make its Summer Camp debut, to be joined by old favorites The Roots and George Clinton & P-Funk, as well as throwbacks Ani DiFranco and Fishbone.

These musical acts from across the industry join perennial festival headliners moe. and Umphrey's McGee, who remain atop of the bill chock full of acts from the Phase 1 lineup.

Once again, electronic acts hoping to join this masterful lineup can enter The Untz Challenge to pick up 1 of 2 Scamp slots up for grabs, as well as slots on 6 other major music festivals this summer.

Visit summercampfestival.com to grab your tickets, before they're gone! With a lineup like this, it's bound to sell out.