The glorious, bizarre, and outrageously talented trio of musicians known as Beats Antique is continuing to grow in popularity. Currently on tour promoting their new album, A Thousand Faces Act I, the group has taken on a new stage setup and fresh approach to their theatrical performance. I got to soak up their outlandish and intriguing spectacle last weekend when they stopped in Springfield, IL near my hometown.

ill-esha threw down some impeccable singing all while playing, dancing, and jumping around. Smooth beats trickled down on her colorful lyrics. Originally from Vancouver, ill-esha has emanated a unique and multi-dimensional approach to bass music, having participated in a variety of projects spanning the electronic scene over the last 12 years. Lil’ miss gangsta.

Beats Antique’s first concept album, A Thousand Faces is a two-part collection with the second part to be released in the spring. They derived their inspiration primarily from Joseph Campbell’s cultural monomyth, The Hero with a Thousand Faces, which brings together stories with the same theme from seemingly unconnected cultures and traditions throughout history. We all know the story - a legend of an adventurous hero who leaves the comfort of his homeland to embark on a quest that eventually leads to the betterment of humanity.

Referring to their tour as a Hero’s Journey, the group incorporates an incredible amount of drama and art depiction in both their new album and live performances, telling the story through their eyes and ears. I was excited to join the sonic adventure and see what they had in store. To start, their new production is filled with unbelievable visuals and projection mapping along with creative direction by Ivan Landau who has done some incredible work with other artists like Random Rab. 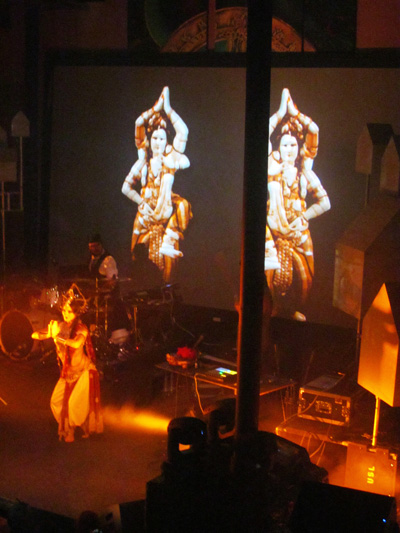 Zoe Jakes, the feminine force and centerpiece for many of Beats Antique’s live songs, never fails to take the beautifully woven music to another level, moving seamlessly between seductively sultry belly dancing to beating her giant marching band drum all with an enticing smirk and a look in her eyes that reminds me of a slithering serpent. The outfits are elaborate and worldly, tying in perfectly with the eclectic music, leaving the audience feeling like they’ve been transported to another time and place.

David Satori is the temporal melody-maker of the crew who always blows my mind by his mastery of every instrument he picks up throughout their shows (which is a many). Beautifully exotic world music expressed by way of violin, guitar, synthesizer, trumpet, and banjo lead the tracks as exquisite, hulking bass pulses and teases.

Their visuals during one song incorporated a fan-based art collection of hundreds of faces. They allowed fans to submit images of faces - humans, animals, masks, and beyond - which they worked into their video clips. When the faces were displayed on the screen, they were shown one by one, taking the audience through the mouth of each face in the most hallucinatory manner possible.

Some of the songs played leaned more towards an instrumental, grand symphonic style, while others leaned more towards heavy, dirty dance beats. At a point during the show characterized by more of the later, an enormous cyclops dog began inflating from the stage, growing larger and larger by the second. Before we had a chance to process what was happening, the creature had more than filled the stage, towering up to the ceiling and completely filling all possible space around it. As Zoe and David Satori swayed it back and forth to the crushing beats, we all laughed in beguilement at the ridiculous sight.

Another amusing act entailed two people in white bodysuits covered in black polka dots, one of which donned a giant dog head while the other a giant fox head. The two characters acted out a sort of humorous satire onstage while music and epic visuals ensued behind them. The flow of the evening was nice in that they kind of gave us a little time to acclimate to the unreal nature of their show, and once that happened everything got more and more ridiculous, the costumes more elaborate, the visuals more psychadelic.

The first song they released off their new album, "Beezlebub," is a collaboration with none other than Les Claypool. Beats toured with him in 2010 and Tommy Cappell (percussion) also used to open for him with a previous group. Having collaborated with him for years, they elected Sir Claypool to be the dark, satanic element of their new album to which he happily obliged. He recorded his portion on the back of a moving tour bus, yet it coalesces masterfully with Beats’ sexy, exotic vibe into a deliciously wicked track that was breathtaking live even without Claypool present.

Check out their new album which was released last week or, if you can, catch them on their tour. They’re going all over the country, so check them out in Boston, New York, Dallas, Los Angeles, San Francisco, or wherever you can. I promise you will not be disappointed. It’s not your average show but sometimes you just have to embrace the weird and, as Joseph Campbell often said, “Follow your bliss.”