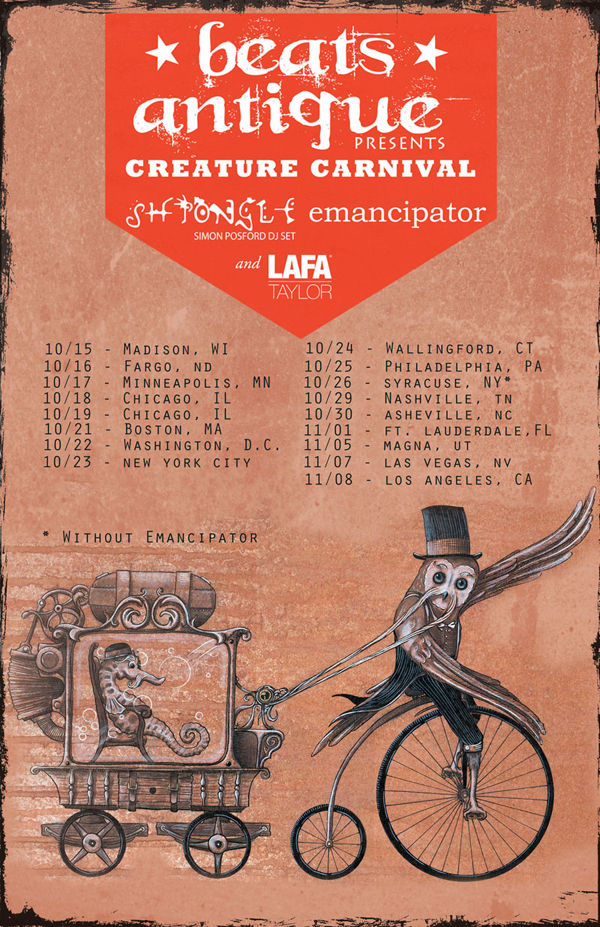 This stacked lineup will hit a number of major markets across the US including Boston, DC, Philadelphia, and Nashville. Opening night is October 15 at the Orpheum in Madison, WI. The circus hits Chicago, IL for a double-dip at the Riviera Theatre on October 18 and 19. The newly opened Brooklyn Bowl in Las Vegas, NV and Shrine Expo Hall in Los Angeles, CA will host the closing nights of the carnival November 7 and 8.

Beats Antique is David Satori, "Sidecar" Tommy Cappel, and Zoe Jakes. Blending Balkan sounds and strings with contemporary bass music and a bubbling stew of world influences, along with a jaw-dropping stage show that puts performer Jakes at the center of a parade of costumed characters, there's just nothing out there like Beats Antique.

Simon Posford is a pioneer in the world of psychedelic electronic music--a perfect counterpoint to Antique's offering. He's been trotting the globe for two decades, and his full live band recently made its US debut at a sold out Red Rocks show back in May.

Joining Shpongle on that sold out RRX date and now on this tour is Doug Appling, better known as Emancipator. The young hip-hop producer carved out his own niche in the downtempo scene with lush instrumentals and stunning live shows. Appling will be on each date of the run, except for October 26.

Bay Area fixture Lafa Taylor will play ringleader to the carnival, ushering in the night with his witty verses and signature style. TheUntz.com recently premiered his collaborative project with Medium Troy, the festival anthem "All My Friends Are Freaks," a spot-on skewering (and adulation) of our collective summer season.

Madison House Presents, the brains behind extravagances like Electric Forest is powering the traveling freak show. TheUntz.com will be along for the ride as official media partner, and way more fun content is on the way as we build towards the start of the tour. More information can be found at creaturecarnival.net.