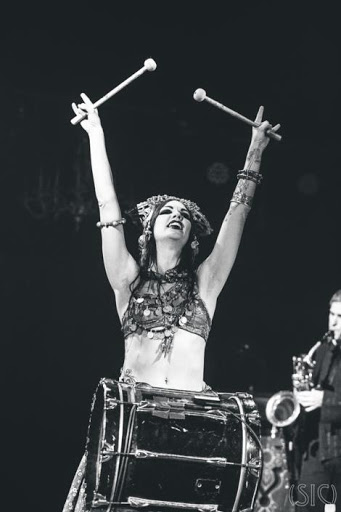 Serving only to secure its place at the top of the live electronic hybrid heap, the bewitching new album from Beats Antique, A Thousand Faces - Act II, is as bold in its approach as it is diverse in its nine tracks. Carefully extending the journey which began with the first act last fall, the second installment in this series is imaginative, inventive, and uninhibited by preconceptions of what electronic music should sound like--and what Beats Antique should sound like, for that matter.

Opener "Dragon's Eye" prepares fans with an overture of textures, melodies, and wild instrumentations found scattered throughout the second act. Dazzling strings, earthy percussion, and exotic flavors emit an aroma unlike any other act in the industry

Fans have already heard "Puzzle," which borrows equally from the frenetic glitch of Tipper, and the gritty soul of Pretty Lights. The most aggressive cut of the album, the energy of its intent is palpable.

"Refusal" brings longtime touring partner SORNE into the mix, with a haunting ballad that is equal parts mournful and enchanting. The Beats sound always provides a delicate bed for vocal accompaniment. It just takes the right partner to make it burst through the speakers.

"Roadworthy" blends the Afrobeat aesthetic of the Antibalas horns with another west African sound, the surf-rock twang of desert blues, as popularized by the likes of Ali Farka Toure and his progeny. The mellifluous stabs work in and around the rough and rugged drums--totally live and utterly engrossing. There's no slickness with this record. You can hear feet stomping and the spit in the valves.

A Thousands Faces thrusts a thousand voices and a thousand more instruments into Beats Antique army. No longer must electronic acts be forced to toil in solitude, arched over a laptop with no sounding board. The openness of the Beats approach says "bring 'em in, if they can hang," and throws a different dart at the map for each unique track. As different from one another as the colors on the palette, crumbling the barriers between genres with each bright note.

Catch the tour, kicking off April 2, bringing a menagerie of creatures and sounds to your hometown: www.theuntz.com/beatsantique/tourdates.