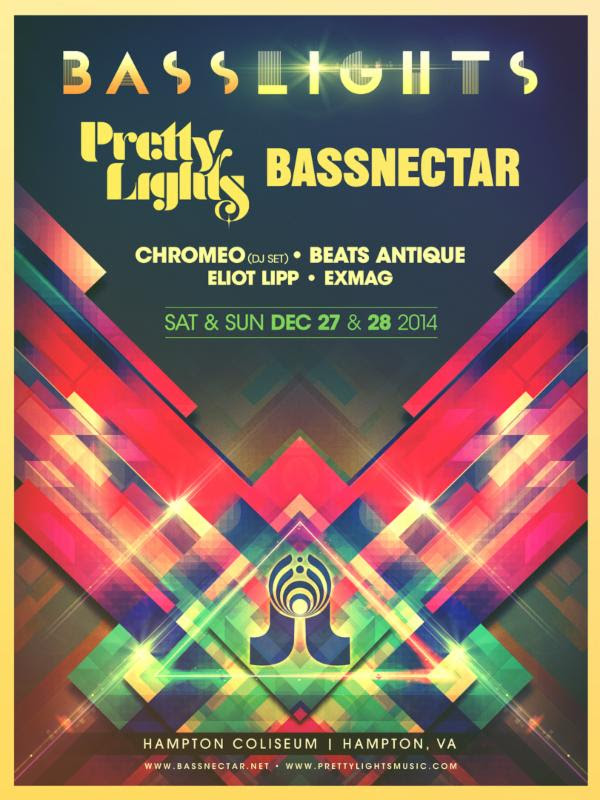 For the third year in a row, Bassnectar and Pretty Lights will join forces for another Basslights blowout at the legendary Hampton Coliseum in Hampton, VA on December 27th and 28th. The sonic juggernauts will be ending the year on opposite ends of the country, but reunite per tradition for two-night stand that will showcase what Lorin Ashton and Derek Vincent Smith do best.

Ashton is coming off a sellout performance at the iconic Madison Square Garden in New York City. The release of Noise vs Beauty earlier this year, and the announcement of NYE360 in Nashville, TN with Tipper signals a flurry of activity that proves the sultan of smash isn't slowing down.

A light fall schedule is evidence of much work on the studio side from Smith. Holed up in Malibu and now New Orleans, much anticipation surrounds the work Pretty Lights is putting into his new album, as well as what could be a bevy of new material for the performance space with Basslights and Sea of Dreams in San Francisco on December 30th and 31st some of his only performances between now and 2015.

Joining the pair of superstars is a similarly star-studded lineup. Chromeo will be direct support one night, thrilling audiences with a DJ set chock full of tunes from White Women, their standout album. Beats Antique, fresh off Creature Carnival will also hit the stage at Hampton with their wild performance. PLM fave Eliot Lipp also joins the bill. His new record Watch the Shadows is out now on Smith's boutique label. Finally Lowtemp love-makers Exmag round out the roster of acts headed to the east coast in

Pre-sale tickets will be on-sale Wednesday, October 22nd at noon EST, and the general public can get their hands on passes Friday, October 24th at 10am EST.