Before his late night set at Atlanta’s Club 668 last Saturday, I talked with Swytch (half of Southern dubstep collective Trillbass) about the group’s glut of new material and robot sex.

Andy Brown: What’s your creative process like when the two of you guys write music?

Swytch: When the group started, I was living in Vancouver, BC, and [Trillbass member] 2Sense was in Birmingham, Alabama, so for the first two years I guess it was all internet collaboration.  And then I moved to L.A. and then back to the South.  And now we kind of do the studio thing together every once in a while but usually each of us still has our own space.  Which is cool.  Cus when we’re together, honestly, chairs get thrown, holes get kicked in the wall…So our studio would literally have to be about the size of this room which is pretty large.

AB:  Are you guys planning to release a full-length album soon?

S:  Actually I’m glad you asked that.  Over the past two weeks I’ve gone back through all our project machines and found stuff that was totally forgotten about.  Like we’ve been working on an album since probably January, and really haven’t released anything…we moved over to Ableton Live now from Reason, and just wanted to expand our sound further than it had gone.  Reason, we hit the glass ceiling with what we could do with it.

AB:  They just came out with a new Reason though.

S:  It’s ok!  I beta tested it.  But we’ve been sitting back and listening to all the music that’s been coming out in dubstep and in glitch-hop, and trying to figure out the next move on it, cus one thing we try to do is stay a little bit ahead of the curve.  The other night going through the machine I came up with 42 tracks.  The album is going to be called the Trillogy, and it’s gonna be a three EP album.  We’re gonna do one part of it a month.  It’s the Trillogy “Beaters, Heaters and Skeeters.”  So the first EP is more hip-hop oriented, real nasty bass stuff.  And then the second one, it kind of shows an evolution, cus the second one is real grimy, more industrial.  And then the third one is prettier, real melodic, pianos, live instruments, guitars, live drums, we’ve been working with [Live Experience and session drummer Daniel] McBeezy on it, he was actually in Birmingham all week with me in the studio and we recorded him onto eight of our new tracks.  So the Trillbass Live stuff is gonna be coming real real soon.

S: Probably right after the first of the year. And then every month after that we’re gonna do another one, and they’re all four to six tracks.  And for Christmas we’re doing a free EP for anybody who wants it that has 10 to 12 remixes on it.

S:  All the time.  My main job is to write and mix and do the management, all that kind of stuff.  So we write all the time.  And we don’t ever stick to one genre, like we’ve got downtempo stuff we’re working on, one of the albums is gonna be 80 to 100 beats per minute, which is kind of outside of the Trillogy project, it’s like glitch-hop stuff just with our bassline kind of style on it.  I’m really happy with those tunes cus it lets us step out of the box.  We’ve also got house stuff going on with Your Dirty Habit, and I think that they just got signed up with Designer Drugs with a couple collabs that we added on.  So a lot of music coming cus we’ve been sitting back entirely too much.  Trillbass.com is the place to get it, we’ve got tons of free everything on that site.

AB:  As a Southerner do you like playing in Atlanta over New York, or…

S:  Well I love the Atlanta team.  Atlanta is paving the way for bass music in the Southeast pretty much.  Not to piss the other cities off cus there are great promoters everywhere, but for the Southeast Atlanta really has the scene for it.  Other cities…like out West is a totally different scene, still great shows, but I guess the influence here is new, versus the West coast where its been a consistent thing.

S:  Hmm…Actually I’m gonna decline that one just cus I’ve got so many in mind. I’m kind of happy that the with dubstep scene the brostep is kind of getting stuck in its own thing.  I’ll go on record saying that Trillbass is not a brostep group and never has been.  New Year’s resolution number one was go to Ableton with audio units and VSTs and to lay off the wobble.  The actual “robot sex wobble,” I pretty much tied my hands and said “I’m not gonna do this.”  If I don’t have to it’s not gonna happen.  Because real bass sounds sound awesome.  You put a filter on it and then it sounds like a duck squawking or some shit like that.  It’s been done man!  Like there’s only so many frequencies you can set an LFO.

S:  We’re working on the live show a lot right now.  So probably expanding it quite a bit.  Beezy on drums, we’ve got [MC] Brian Kakarot.

AB:  Are you guys going to stick strictly to dubstep?

S:  No absolutely not.  I like to say we’re more bass music than anything…Never sit down in front of your medium or your canvas and paint by numbers, or whatever.  I don’t like hearing artists that you can tell have a formula, even though they were great, but being predictable is something that artistically is just not how I want to have us known.

AB:  How do you feel about LeBron leaving Cleveland?

S:  I used to live in Cleveland, not for very long, about 8 months, but they put up the biggest poster of him…it actually took up a 25-story building or something.  Cleveland was a little too involved in LeBron stuff.  But honestly I don’t give a shit about that.

Here is a recent track from Trillbass: 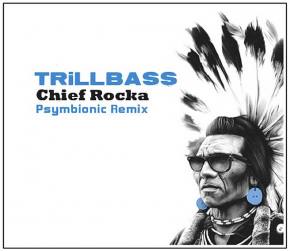 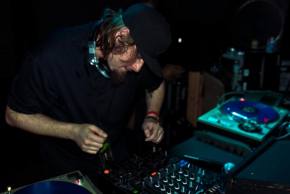