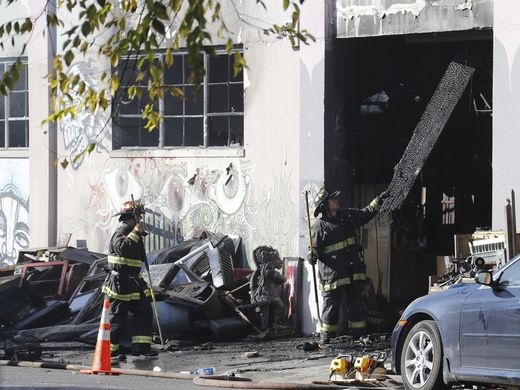 Edit: With 20% of the building now searched, the casualty count has risen to 24 deaths.

The death toll is expected to rise as firefighters and city officials continue comb through the debris of “The Ghost Ship” in Oakland's Fruitvale neighborhood. Late Friday night a blaze erupted through the warehouse during Golden Donna's 100% Silk tour stop.

An official from Oakland's Department of Planning attempted to enter the building in mid-November amid reports of blight and illegal housing in the building. The labyrinthine space had been subdivided into artist studios and many were reported to be living on the premises, which was a mess of beams, exposed wiring, and piles of relcaimed materials.

Of the estimated 50 people within the building at 31st Ave and International Blvd at least 9 have been confirmed dead with dozens more still reported missing. Many of the patrons were upstairs on the second floor when the fire broke out, and it has been reported that the only staircase was constructed of stacked shipping pallets, though those reports have been unconfirmed. Many of the missing have been said to be international visitors.

The Ghost Ship has received a number of complaints from neighbors due to safety issues, and the amount of trash strewn about the building. The warehouse was being used as a neighborhood recycling center in addition to housing artists and functioning as a warehouse space for dance parties. Alamada County Sheriff spokesperson Ray Kelly has noted bulldozers, cranes, and wrecking crews will continue to pull apart the building today in order to recover the remainder of the bodies, and that cadaver dogs and drones will be used to locate those unable to be reached.