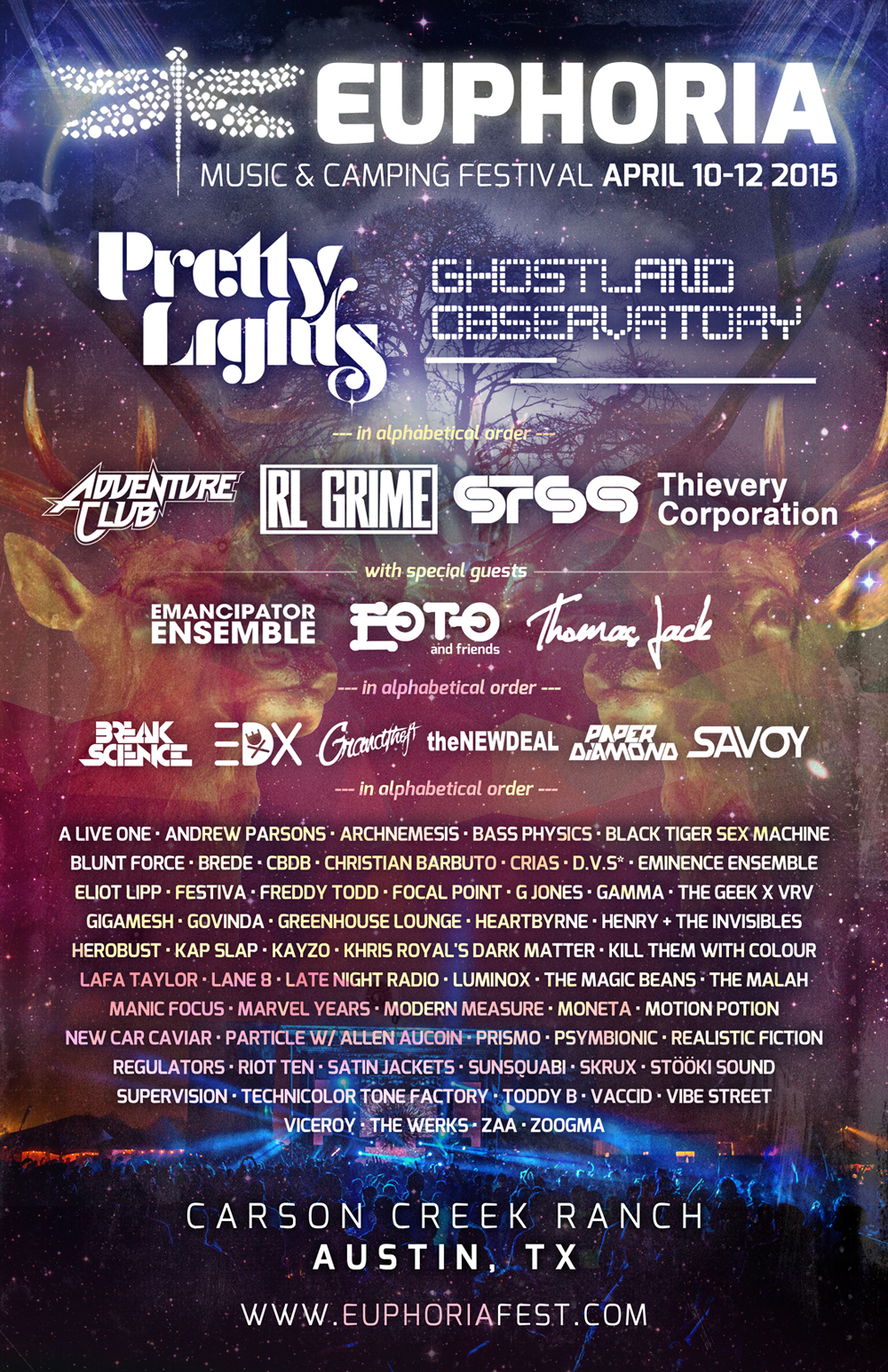 Euphoria Festival, which happens to be one of Austin’s favorite on-the-rise music and camping events, is almost here. The schedule has been announced, the production building has begun, and hopefully you already have your weekend pass. With such a stacked lineup on three uniquely fantastic stages, it’s best to plan which acts you want to catch ahead of time.

After much thought and consideration we’ve compiled a list of our top recommendations to catch during the three-day party at Carson Creek Ranch.

Although Sunday is the last day of the festival, there will be plenty of talent showcased throughout festival grounds. The UnEarth Tent will be hosting muti-talented Derek Van Scooten (D.V.S*) Sunday evening. If you aren’t yet familiar with the music of D.V.S* it can best be described as finely sculpted livetronica. Derek is both a talented dance music producer and amazing guitarist; his live performances incorporate both of those skills, which ultimately add a deeper element to the dance music experience.

Freddy Todd is a name that is gaining a lot of momentum on festival circuit, and for good reason. Freddy’s unique sound production and eccentric style blend an 80’s steeze with futuristic elements. Freddy’s music will, without a doubt, make you want to tear up the dance floor while putting you in a feel good mood. Make sure to catch him Saturday evening.

Ghostland Observatory is more than an Austin legend; the duo is renowned worldwide for their delightfully eccentric music and even more entertainingly bizarre performances. It’s exciting to recognize that Euphoria Festival will be Ghostland’s first performance since the duo's long hiatus, so make sure to catch these two Saturday night before Pretty Lights. There will likely be capes and lots of hip thrusting.

G Jones has been killing the West Coast bass game, and he’s bringing his signature sound to Austin for Euphoria Fest as part of his current tour. Make sure to catch this trap music pioneer at the gorgeous Dragonfly Amphitheater on the river for a Saturday full of hyphey bass, upbeat rhythm and scenic views.

John “JmaC” McCarten, also known as Manic Focus, is blowing up the EDM scene with his dynamic bass music, melodious grooves and tasteful sampling. In case you aren’t familiar with Manic Focus, it is telling to know that he is classically trained on the piano; this fact explains the producer’s deep understanding of music composition. Make sure to catch John on Sunday evening at the Euphoria Stage for eclectic dance music and relentless dancing.

There’s no better way to get a party started than with a Psymbionic set on Friday afternoon. John Burcham, a multi-genre bass music advocate, knows how to shatter genre boundaries and get a crowd moving with his original dance music. Burcham clearly puts his soul into his craft, and consequently vibes with his audience on a real level. This is a potent recipe for an incredibly amazing start to a magic weekend, so make sure to catch him on Friday afternoon.

Gray Smith, Ben Eberdt, and Mike Kelly (AKA: Savoy) want to keep your energy up and spirits wild on the last day of Euphoria. The EDM trio is bringing their intense beats and rowdy bass to the festival Sunday night. Make sure to catch the three at the UnEarth Tent; there will be lazers and booty shakin’.

STS9 is definitely the cherry on the top of Friday’s delicious lineup. We couldn’t think of a more ideal way to close out your first festival night than with an extra long Tribe set. The band has been absolutely killing it since Alana Rocklin joined last year, and we expect them to keep up the fuego for Euphoria Festival this weekend. You’d be absolutely insane to miss STS9 at Euphoria Festival.

Make sure to get your groove on early Friday evening with everyone’s favorite “peanut butter band” at the gorgeous Dragonfly Amphitheater. The Boulder-based band, comprised of Kevin Donohue, Chris Anderson and Andrew Clymer, will without a doubt bring their notorious electronic hydro funk sound to Austin. The three-piece never fails to take their audience on a euphonic journey through funky beats and full-throttle jam. Do not miss this early festival dance party at Euphoria.

Vibe Street, also known as Ben (or Smiles) Davis, has began to take the scene by storm over the last year. The Denver-based producer brings his own unique flavor of future-funk to any stage he occupies. With a healthy dose of genre exploration and dashes of sensuality, Davis will undeniably get the crowd vibin’ and movin’ Saturday at Euphoria festival. Make sure to catch Vibe Street at the Euphoria Stage Saturday.

While all of the acts we listed are top-notch, Euphoria Festival has a plethora of other insanely talented producers and live acts playing over the weekend. The festival also provides more than just euphonic stimulation; other activities such as yoga, workshops and art exhibitions will take place over the weekend. Make sure to experience as much as you can in those three amazing days; find your own Euphoria.