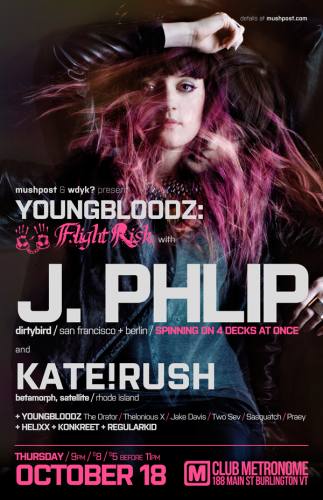 Mushpost + Who Do You Know? present

aka THE FIRST LADY OF DIRTYBIRD

Known for such club anthems as...

+ contests from THE UNTZ and UVM/BORED soon...

J Phlip (pronounced J Flip) known to some as Jessica Phillipe discovered house music in her hometown of Champaign, Illinois, just 2 hours south of Chicago. Sometime around her 19th birthday she got her first DJ rig - two belt drive turntables and a mixer lacking EQ knobs for $100 bucks! From then on, her poor roomates were forced to listen to a constant dance party in-between her Systems Engineering studies. There aren’t a lot of 4.0 braniac engineering majors who decide to become DJs instead of cashing in on their degrees but Jessica truly loves the music and has dedicated her life to it.

Her proximity to Chicago’s famous house scene tremendously affected her sound, but the distance afforded her the freedom to incorporate a variety of other influences into her repertoire. Her sets posses a fun, “lets-not-forget-this-is-dance-music,” feeling and simultaneously keep you guessing about what might come next. Her collection spans house, tech house, deep house, techno, booty bass and pretty much anything that make you shake your ass.

She’s currently a well known DJ/Producer in San Francisco. Her skills on the decks and in the studio have secured her highly desirable spot as an official member of the dirtybird crew. She has a residency at San Francisco’s infamous Endup nightclub, which is notorious for its non-stop, never-ending parties.

I'm certain this bio is supposed to give you an idea of who I am. I dig bass music. I got my first taste at 18 & haven't looked back, no desire to. In 2006 I grabbed up a set of Tech 12's & a crate of records & pretty much wore them out in my living room. I came up in Syracuse, NY on progressive house, was exposed to dubstep in 2008 & started blending the two together. Currently I'm living in Providence, RI and I've added jungle & liquid dnb to my list of audio addictions. Turntables + Traktor is my weapon of choice & a heavy baseline is my kind of silence. If you were expecting the list of places I've played, and people I've been on a lineup with, sorry to disappoint you; I don't have the attention span for that. ♥ I'm gonna go play some music now.

featuring the fine selections of: 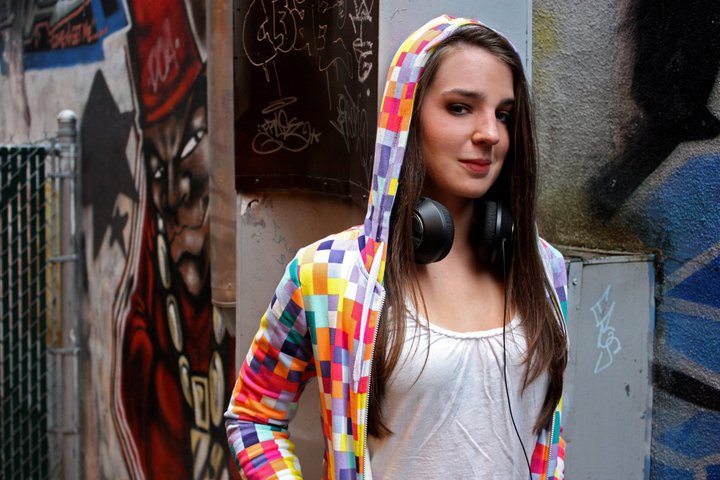