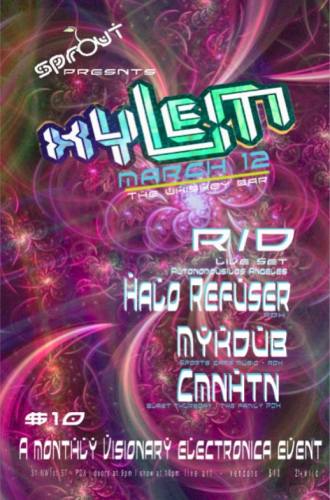 Sprout Productions is happy to bring you another lucsious episode of XYLEM, a monthly visionary electronic music event. This month's selection of tonal wizardry will be sure to tantalize your musical sensibilities. In order to help catalyze the community, XYLEM will include Creative Entrepreneur Booths, LiveArt, and Projected Visuals as always.

way through the imaginative souls of its listeners, offering a deep

exploration of subsonic mood and emotional atmosphere. Focused on unifying

electronic music through diverse influence, the process fuses elements of

many genres like dubstep, breakbeat, downtempo, idm/glitch, and techno but

without the need for formulaic restrictions.

global spectrum of electronic music. The last year alone has brought a 27

Radio 1's The Mary Ann Hobbs Show, a full length album and a handful of

compilation / remix releases. Aligning Minds has had the pleasure of

collaborating with and performing alongside artists as varied as Shpongle,

Intent on reaching a musical standpoint of balance and harmony between

stylistic ideas, Aligning Minds moves forward as a musical force with an

ethic of positive growth and change.

Halo Refuser is the electronic brainchild of virtuoso keyboardist/producer Asher Fulero (as well as an anagram of his name). Futuristic beats and otherworldly textures combine with huge basslines into a swirling, danceable experience that feeds both brain and body through alternating passages of dissonance and beauty.

Fulero is best known for his distinguished work on piano/keys for The Everyone Orchestra (collaborating with jam-stars like Jon Fishman (Phish), Steve Kimock, String Cheese Incident, Steve Berlin, Kai Eckhardt and many, many more) and for his gorgeous 2010 solo piano album 'The Green Piano', but is also long-established in the live-electronica world as one-half of the now defunct live-tronica group Surrounded By Ninjas.

Endorsed by Moog Synthesizers, Fulero also uses a laundry-list of modern production techniques to achieve all sorts of sonic bastardization, re-warping all of it from within Ableton Live onstage.  Fearlessly modern and un-apologetically obtuse, Halo Refuser is ready to spin your head and make you question all you've heard.

Halo Refuser's first official release, 'Hear Ourself' (also an anagram for Fulero's name), was released independently for free download in July 2009 and in July 2010 he followed up with the 'Lumbering' Single+Remixes EP featuring tracks from Graintable, Solovox, Auditory Sculpture, Plumblyne, and others.  Since then he has shared bills with established electronic innovators like KJ Sawka, Rena Jones, EOTO, Big Gigantic, and Mike Slott, as well festival appearances and podcast performances. He has another free EP about to be released and his full-length CD debut is scheduled for Spring release.

As a performer Mykdub strives for the dance floor experience to be a journey. By using elements of Glitch, R&B, Trip-hop, Dubstep, and Breaks he takes the listener through areas of bliss with sounds of melodic synths and heart felt sexy vocals, into the feelings of playfulness with catchy rhythms and rowdy influences. While throughout its entirety being blessed with the rooting sound of body shaking bass-lines.

Mykdub (Mike Wright) picked up his first pair of Technics Mk-5ʼs in 2006 and began performing locally around his home town of Eugene, Or. After a couple years of developing his style he learned of Ableton Live. This was when his love for bass music was taken to the next level. Being able to incorporate loops and samples into his live sets and by having the tools to create remixes in a live setting was what he was after. Since then he began producing and sending more dynamics through the airwaves.

In 2009 Mykdub teamed with Tiger Fresh to form the crunky mash-up duo know as Sports Cars. The two quickly gained recognition around the northwest and have played at festivals such as Emerg-N-See and Burning Man.

Mykdub is also half of The Dream Dusters. Together with house dj and drummer Andrew Mataus they have an eclectic sound of mid-tempo funky bass music incorporating live drums.