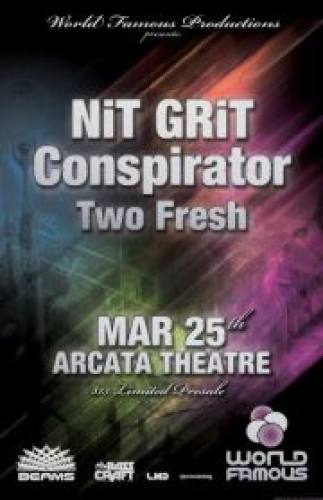 
"One of the most prolific and hardworking of the new field of dubstep/grime performers, his current music was formed in his home turf of the Bay area from a background in glitch, idm, and breakcore, and is set apart by its soulfulness and melody."

"Formed in 2004 by Aron Magner and Marc Brownstein (The Disco Biscuits’ keyboardist and bass player) along with New York producer DJ Omen, Conspirator has taken on many forms through the years. With the recent addition of virtuoso guitarist Chris Michetti and stalwart drummers Darren Shearer (the New Deal) and Mike Greenfield (Lotus), Conspirator has reached a new level."

"Built on a foundation of instrumental hip hop, their music seamlessly incorporates elements of sampling, a tight low end and catchy synth lines, with a strong beat always at the cornerstone."