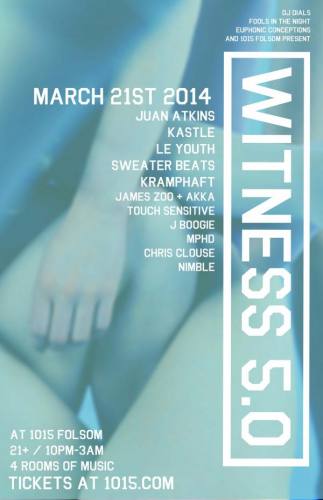 
At the dawn of the 1980s, Juan Atkins began recording what stands as perhaps the most influential body of work in the field of techno. Exploring his vision of a futuristic music which welded the more cosmic side of Parliament funk with rigid computer synth-pop embodied by Kraftwerk and the techno-futurist possibilities described by sociologist Alvin Toffler (author of The Third Wave and Future Shock), Atkins blurred his name behind aliases such as Cybotron, Model 500 and Infiniti — all, except for Cybotron, comprised solely of himself — to release many classics of sublime Detroit techno.


As the electronic scene began looking back to the past to find musical innovators, Atkins was a name much-discussed and -anthologized, hailed as the godfather of techno. Born in Detroit in 1962 (the son of a concert promoter), Juan Atkins began playing bass as a teenager and then moved on to keyboards and synthesizers, after being turned on to their use in Parliament records. Two local DJs, Ken Collier and the Electrifyin' Mojo, first introduced Atkins to a wide range of other synthesizer-driven bands — Kraftwerk, Telex, Gary Numan, Prince, the B-52's — in the late '70s.


Juan Atkins had no trouble staying busy during the mid-'80s. He continued working with the music collective Deep Space Soundworks which he, May and Saunderson had founded in 1981 to provide a club-based forum for their music. Later, the Deep Space family founded their own club, the Music Institute, in the heart of downtown Detroit. It soon became the hub of the Motor City's growing underground family, a place where May, Atkins and Saunderson DJed along with fellow pioneers like Eddie "Flashin" Fowlkes and Blake Baxter. The club invigorated the fractured sense of community in Detroit, and inspired second-wave technocrats like Carl Craig, Stacey Pullen, Kenny Larkin and Richie Hawtin (Plastikman).


Of course, Atkins continued recording during this time, and the period from 1985 to 1987 proved to be his most influential period. He founded his own label, Metroplex Records, in 1985 and recorded his first single as Model 500, "No UFO's." Derrick May, who was living in Chicago at the time, invited Atkins over and told him to bring his records. The duo sold thousands of copies, and "No UFO's" soon became a hit with Chicago mix shows like the Hot Mix Five. Later Metroplex singles like "Night Drive," "Interference" and "The Chase" also sold well and set the template for Detroit techno; moody and sublime machine music, inspired by the drone of automated factories and trips down the I-96 freeway late at night.


By 1988, Britain had caught up with the advanced music coming from Chicago and Detroit; soon Atkins, May and Saunderson made their first trip (of hundreds) across the Atlantic, in Atkins' case before thousands of people at one of the open-air raves typical of England's Summer of Love. Acts like 808 State, A Guy Called Gerald, LFO and Black Dog began due in large part to the influence of Atkins, and the man himself was invited to remix current pop acts like Fine Young Cannibals, Seal, Tom Tom Club, the Beloved and the Style Council.


Atkins visited Belgian R&S Records in 1993 and worked with 3MB, the in-house production team of Thomas Fehlmann and Moritz Von Oswald (both of whom were to go on to better things, in Sun Electric and Basic Channel/Maurizio, respectively). He returned to Berlin several years later to begin recording what was, surprisingly, his first album since the days of Cybotron. Finally, in mid-1995, R&S released the debut Model 500 album, Deep Space; more importantly, the label also released Classics, a crucial compilation of Model 500's best Metroplex singles output.


Another retrospective, Tresor's Infiniti Collection, traced Atkins' work as Infiniti, recorded from 1991 to 1994 for a variety of labels including Metroplex and Chicago's Radikal Fear. Several years passed before he released any additional material, but it came with a rush during 1998-99. First in September 1998, Tresor released an album of new Infiniti recordings named Skynet. One month later, the American label Wax Trax! released a Juan Atkins mix album. Finally, in early 1999, the second full Model 500 album Mind and Body was released on R&S Records


Kastle’s forward-thinking music results from his long-time love of hip-hop and R&B, fused with the magnetizing effect that dubstep, garage and bass-heavy music has had on him. Last year, his track “Stay Forever” from the eponymous EP reached the iTunes Top 10 Best Electronic Songs of 2012, and he embarked on his highly successful ‘Stay Forever’ tour across North America, and into Australia and New Zealand. Kastle has garnished strong media attention from the likes of XLR8R, URB, MTV Hive and Fact Magazine along with plays on BBC Radio 1 and KCRW. His highly anticipated debut album KASTLE drops on April 23rd, followed by his first North America live tour.


The studio and touring dichotomy of an artist's life is a perfect yin & yang for Kastle in both his production and outlook. His professional experience as an engineer puts forth clean, crisp production, but his love for the party provides a playful bass that eats a room. Altogether, the wide varieties of vocals - both originals and sampled - are a key element to Kastle's sound. "I grew up on hip hop and R&B, and sampling is considered an art form," he says. "It's becoming more and more fun to dig through old records and find obscure samples." He cites another unexpected influence -legendary French filmmaker Jean-Luc Godard, who had once said that "it's not where you take things from, it's where you take them to."


“Kastle pushes the kind of soulful, low-end-centered, forward-thinking dubstep tunes that could just as easily soundtrack a night out at the club as they could the lonely walk home afterwards.” – XLR8R


"Kastle hails from the US, and has been keeping us up to date with his various remixes and original productions for a little while now. One of our favourites is his remix of Cassie’s ‘Me & U’, where one of the best R’n’B songs of recent years gets warped into a bass-drenched cyber-pop epic reminiscent of early Joker and Bok Bok’s ‘Youth Blood’ remix." - FACT Magazine


90s sounds refracted through a thoroughly modern aesthetic. Tracks that are serious about moving a dance floor full of people without coming on too strong. Breezy California vibes touched by a twist of European flair and an air of mystery. This is what Le Youth is about.


Wes James is the slightly enigmatic Angeleno behind Le Youth, a producer without a past whose music is steeped in it. His signature sound is a blend of Clinton-era R&B and the house music that was lighting up dancefloors and radio stations around the globe during the same period, and the leisurely grooves, airy synthesizers, and pop hooks of a song like his debut single “C O O L” can easily pull a listener back to the pre-millennial, pre-Internet days when dance music offered a transcendentally blissful brand of hedonism that’s considerably harder to find on today’s Agra-edged EDM landscape.


Viewers of the new video for “C O O L” (directed by Renata Raksha) who know their 90s music will likely pick up on the influence of a number of cultural touchstones from the time: chart-topping crossover club acts like Technotronic and Black Box, house divas like Robin S. and CeCe Peniston, and R&B icons like Aaliyah and Ginuwine, as well as a visual sensibility that evokes Herb Ritts in his role as video director to the decade’s biggest pop superstars. It’s got retro style while maintaining completely contemporary feel that’s free from gimmicks and offers stylishly relaxed relief from the ongoing onslaught of dayglo-tinged dubstep.


Le Youth’s already attracted the attention of tastemaking dance music bloggers and tastemakers, and his music has already topped the charts of one of dance music's most exclusive barometers, Hype Machine. His next move? Nothing less than defining the sound of summer 2013.


"I make music to make your booty bounce."


Short and succinct, straight from his own Bio.


Sweater Beats is signed to label HW&W Recordings, alongside the likes of Ta-ku and Kaytranada and as such, is on another level.


He's one of many producers and beat heads simultaneously shaping and riding this big wave of internet music, pushing/blurring/breaking genre's left, right and centre to weave together sets that boil down to two basic ingredients: beats and bass.


Using his own originals, remixes and of course, a whole back catalog of tunes from all over the world, Sweater Beats will warm you up this winter and of course, make your booty bounce.


Krampfhaft hails from Utrecht. His name means something like "convulsive," which fits his erratic, constantly moving tracks to a tee. The producer, known to friends as Joris van Grunsen, debuted on the label Saturate Records with the "Brightly Colored Candy Teardrops" EP, a title which describes it as well as anything ever will. He also released the fantastic 7" "Spit Thunder," on which he layered bold synths over speed-addled drums and syrup-drenched vocals. It was a hint to where he'd go in the near future, mincing 8-bit with futurist sound design and all kinds of alien structures. But it was on his first release for Rwina, the freshly-baked Makin' Magic EP, where Krampfhaft's genius really comes to light, as he incorporates footwork influences in a manner much smoother than many of his cohorts. On tracks like "I Needed You", he takes the hyperactivity of his debut and turns it into hyper-focus, laser-guided footwork destruction, and on the EP's title track he constructs a megalomaniac synth eruption complete with overblown pronouncements of grandiosity.
About | Advertise | Contact | FAQs | Terms of Use | Privacy Policy | Accessibility Policy © 2021 - TheUntz.com. All rights reserved.