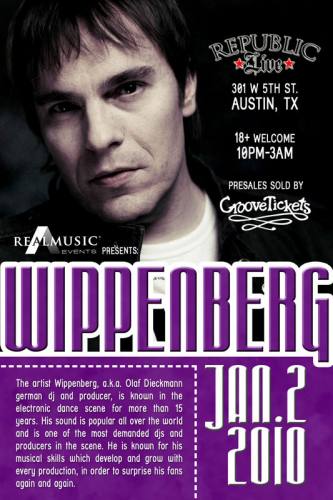 What: WIPPENBERG AT REPUBLIC LIVE

Artists:
Wippenberg, Nabiya De Grace, Bruce Gibbons, Andrew Parsons
Additional Information:
WIPPENBERGS FIRST EVER TEXAS APPEARANCE!!
OPENING DJ'S ANDREW PARSONS, BRUCE GIBBONS & NABIYA DE GRACE!
Famously, Olaf carved his name deep into the heart of the mid-90s dancefloor with his very first track - the unforgettable, speaker-assaulting ‘Neurodancer’. Released on Hyper Hype, it became an import smash and was picked up by Hooj Choons off-shoot Prolekult. To this day ‘Neurodancer’ rests as one of the hardest-to-find and most in-demand pieces of dance vinyl in the world - regularly changing hands for many times its original price. No Wippenberg biography would be complete without mention of Dieckmann's remix and spinning work. Behind the decks his characteristic musical tastes and spinning style have started to generate huge demand. It has seen him blaze a trail at 2009’s Trance Energy, rock the German leg of ASOT400 & deliver deck damage at Dance Planet Russia, as well as dozens of other, clubs, festivals and tent-poles events. At the remix end of the mixing desk, Olaf has refashioned tracks for a number of A-List production outfits, including Tiësto, Above & Beyond, Cosmic Gate, Gabriel & Dresden and Super8 & Tab. Most recently his remix of Rank 1’s Trance Energy 2009 anthem ‘L.E.D. There Be Light’ became the focus of many DJs playlists. On the immediate horizon Olaf has just finished new remixes of tracks for Paul Van Dyk & Riva as well as Ingrosso's MGMT ‘Kids’ sampling ‘Laktos’. He’s also set to release the hotter than hot new Wippenberg single… ‘PONG!’
About | Advertise | Contact | FAQs | Terms of Use | Privacy Policy | Accessibility Policy © 2022 - TheUntz.com. All rights reserved.