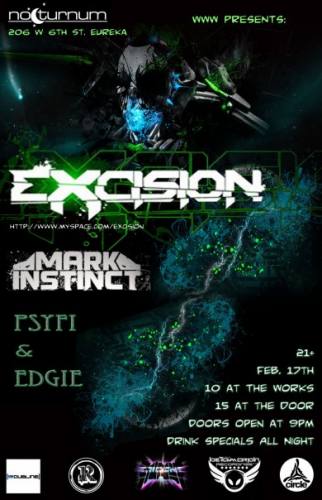 WHOMP WHOMP WEDNESDAYS w/ High Art, On it & Western science presents::
EXCISION (BC, Canada)
Mark Instinct (B.C, Canada)
PSYFI & EDGIE
Live at NOCTURNUM, EUREKA CA USA
February 17th @ 9:30
Advanced Presales at THE WORKS Arcata/Eureka $10
$15 at the door
Excision Info:
Taking influence from Drum and Bass, Metal, and Hip Hop, Excision is a Dubstep artist who must be heard to be fully believed. Combining the morphing bass lines of Drum and Bass, the aggressive energy of Metal, and the laid back vibes of hip hop, Excision’s style is incomparable.
At only 22, this young Canadian’s passion for music has already driven him to become one of the biggest Dubstep acts of North America. If you’re lucky enough to catch a live set, expect an assault of bass-heavy tracks, mixed quickly and seamlessly.
Upon the selling out and repressing of his first release, “No Escape” on his own label Rottun Recordings, it became apparent that there was a large demand for the dark side of Dubstep. This was proven to be true when Excision was asked by Electronic Music Superstars Pendulum to remix their latest single “Showdown.”
At Canadian music fest., SHAMBHALA, Excsion shared the bill with the likes of Bassnectar, AC SLATER, Benga, and Sub Swara. The crowds left all talking about Excisions set that decimated the dance floor.
His tracks featuring bass badboy Datsik have been been some of dubsteps most talked about tracks of 2009. An Excision set will be one to remember!
Look out for collaborations with North American Bass Guru Bassnectar, Pendulum, and many others ranging from Drum and Bass heavy-weight SPL, to Dubstep womp master DZ. With an upcoming U.S. tour alongside Pendulum, and a set at the fabled Shambhala Music Festival among many other Canadian and U.S. dates throughout the year, Excision is one to watch.
Mark Instinct Info:
Hailing from Canada, Mark Instinct is no rookie behind the decks. Packing a punch of exclusives and system shattering bass you'll feel this guy coming from a mile away. Mark Instinct has been known for his high energy DJ sets, seamless mixing, and pure charisma on stage, making any crowd in front of him shuffle or swagger. Mark has been headlined with world class talent in many Canadian Nightclubs and shows no signs of a slow down
As a producer Mark is quickly making a name for himself and putting Western Canada on the map for Dubstep culture. Currently with 2 releases on U.S. label Betamorph Recordings,
Mark is already topping sales charts with his tune "Sketchy Maxx" which is getting an overwhelming crowd response around the globe and play from world class DJ's at many nightclubs and festivals. With that success a Remix Ep is slated for release in late 2009 featuring artists such as Trillbass, Emu, Pawn, Metaphase & More. With the growing success Mark is also being recognized for his track "Badman Sound" which has been getting immense feedback on the dance-floor and currently has a world wide vinyl and digital mp3 release slated for late-mid 2009.