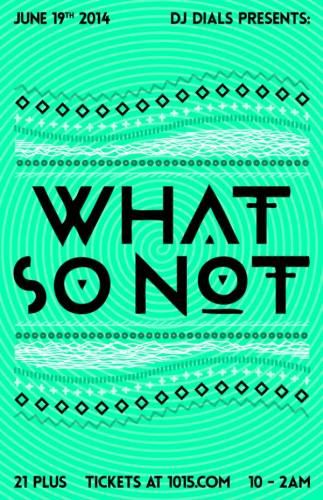 What: What So Not


WHAT SO NOT live


Hailing from the sandstone bedrock that is Sydney, this duo (one half skyrocketing electronic act FLUME, one half flaming dj rockett EMOH INSTEAD) is the fresh face Australia's beloved 'Sweat it Out' & voice of the ADD generation.


Released in Mid November 2011, their debut 4 track EP '7 Dollar Bill' caused quite a stir;
Switch, Bag Raiders, Sinden, Boys Noize & countless others, all on board for this new sound.


2012 has seen an onslaught of epic remix's from the pair. Most notably their mix of Major Lazer's 'Get Free'.
Gaining the attention of Flosstradamus, Nero & Diplo himself, their future bass rework, scored them official 12" Vinyl release on Mad Decent/Downtown


With the who's who of EDM dropping their tunes on BBC Radio 1 & every major festival around the globe, don't be surprised if you see the WSN boys coming to a town near you