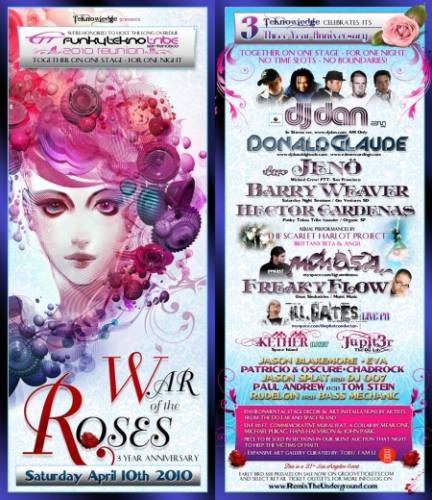 What: War of the Roses

The 3rd Annual War of The Roses @ Lot 613
2 Giant Wherehouses stacked with FUNKTION ONE sound
with a 3rd stage under the stars surrounded by the I AM U art display, live painters and custom silk screening!
It's been a long time coming, the stories you've heard the memories many of us shared ... back in a time where many of us didn't quite realize what we had... from San Francisco to LA, from Organic to Tribal Massive in the bay... what Dj Dan & Hector Cardenas did when they formed Funky Tekno Tribe.. inspired our West Coast sound!
On Saturday April 10th, 2010, as we celebrate TeKnowledge's 3 year anniversary, we're honored to host the long overdue
** 2010 Reunion of the FUNKY TEKNO TRIBE **
Bringing them together on one stage for one night -
no time slots - no boundaries!
DJ DAN
http://www.djdan.com http://www.myspace.com/djdanmusic
In Stereo Recordings / Nettwerk Recordings AM ONLY
DONALD GLAUDE
http://www.djdonaldglaude.com http://www.edenrecordings.com
http://www.bugeyedrecords.com AM ONLY
JENO
Wicked Crew, FTT - San Francisco
BARRY WEAVER
Go Ventures - FTT - San Diego
The founder of Funky Tekno Tribe...
HECTOR CARDENAS
http://www.myspace.com/djhectorc
With Aerial performances from The Scarlet Harlot Project's
BRITTANY BETA and ANGEL
JASON BLAKEMORE
Fiveleg / Blue moon
PAUL ANDREW b2b TOM STEIN
Fresh, Grooveyhousebeats.com
** Masquerade Ballroom **
Don't miss this year's masquerade, we're going all out to celebrate 3 years remixing the LA underground while FTT brings the Funk to the floor we'll be droppin' that bass we know you adore...
Bringin' back one of our old school favorites repping the D & B -
FREAKY FLOW
Gsus Sindustries / Moist Music / Furious Records
g-sus.com, http://www.freakyflow.com
One of the most talented artists in dance music right now..
Psychadelic Stereo Tour feat.
MIMOSA
http://www.myspace.com/tigranmimosa - Muti Music
Your iPhone dont got an app like this..
ILL GATES performing Live!
http://www.myspace.com/thephatconductor
KETHER (dj set)
http://www.myspace.com/kethermusic
Muti Music, Space Island, TeKnowledge
JUPIT3R
The Do Lab, http://soundcloud.com/jupit3r/sets/jupit3r-music
OSCURE & PATRICIO b2b!
L.A.B.A, Space Island, The Do Lab
EVA
Broke, Kimchee Love
JASON SPLAT b2b DJ 007
Phunked Up, TeKnowledge
CHAD ROCK
L.A.B.A.
RUDELGIN b2b BASS MECHANIC
TeKnowledge, Space Island, Funk The System
Just Added -
DEMON0NE (BWOMP!, Dubstep FM)
&
RICHARD SWEAT (BWOMP!)
Environmental stage decor & Art installations by the collaborative team of artists from The Do Lab and Space Island!
Live 20 ft. mural painting by 4 of LA's acclaimed visionary artists:
MEAR ONE * MICHAEL PUKAC * HANS HALVERON * JOHN PARK
The mural commemorating the event will be sectioned out for our silent auction that night and portion of the proceeds will go to help those affected by the Haiti earthquake.
Expansive art gallery presented by I AM U
Roaming photography captured by our community favorite CURIOUS JOSH REISS
Custom print screened War of The Roses shirts from Coco & the Sew-Op
Clothing & Art Bazaar including AD 2013 & Grooveriders clothing.
Early arrival is strongly suggested (and will be rewarded!) We highly advise you purchase presales to secure your place in this historic event.
Early bird $20 presales are nearly sold out, get them @
http://www.groovetickets.com
http://fla.vor.us/170197-War-of-The-Roses-tickets/War-of-The-Roses-Los-Angeles-The-Wherehouse-April-10-2010.html
or in-store @
AD 2013 Clothing - 2539 Lincoln Blvd Venice and
Grooveriders - 4408 Vesper Avenue Sherman Oaks
Log on to http://www.remixtheunderground.com for updates & detailed info.
Media/Press contacts E-mail Teknowledge@Remixtheunderground.com
It's time for some Funky TeKnowledge!
Look out for the official War of The Roses pre-party at the end of March in Venice... and don't forget Lightning in A Bottle May 28th - May 31st at Oak Canyon Ranch presented by our friends at The Do Lab http://www.lightninginabottle.org
VH1 article on The Funky Tekno Tribe -
San Francisco's Funky Tekno Tribe, an underground collective of DJs, electronic musicians and promoters, including DJ Dan and Donald Glaude,
will launch the North American stint of their Generations world tour on Sept. 2 in Denver.
Generations will hit 12 cities across the United States before ending at the legendary Halloween Tribal Massive event Oct. 14 at San Francisco's Bill Graham Civic Auditorium.
"A lot of people have heard of them and there's a mystique there, now they get to see what Funky Tekno Tribe is about," said Seattle's Glaude. "The production, the lineups we bring, the type of sound that comes forth, the whole Funky Tekno Tribe vibe is greatly needed to be seen by people outside the West Coast."
Other DJs on the tour include Barry Weaver, Graeme, Hector Cardenas, Arturo Garces, Jeno and DJ Mea. Special guests will join the Tribe at various stops, including DJ Sneak, DJ Rap, Mark Farina, John Acquaviva, Dean Coleman, Supa DJ Dimitry, Mr. C and "Evil" Eddie Richards.
"I describe it as bringing the funk whatever way you want to bring it," Glaude said of the roster. "It's individual sounds that make up one whole thing."
Funky Tekno Tribe also are scheduled to take part in the Cypress Hill-hosted Smoke Out show on Oct. 7 in San Bernardino, Calif. Dilated Peoples and 311 are also on the bill.
The Halloween Tribal Massive, which will celebrate its eighth year, is considered one of the premier dance parties in the United States, attracting nearly 10,000 people in recent years. Headlining acts from around the world will be announced later this month.
"I always look forward to that show," Glaude said. "It's one of those annual events that's kicked ass since it first began. People hear that and they come expecting a good time."