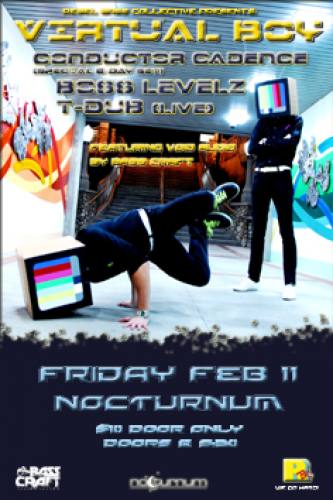 Hotwiring naughty synth lines and dancefloor-crushing beats with elegant harmonic textures and twisted, pop-cultured hooks, Virtual Boy craft a grimy, cinematic sound all their own on the group’s debut EP “How Long Does It Take To Get To Space?,” dropping July 21, 2009 on 1320 Records. But even before Virtual Boy had an official release, taste-making DJs spanning packed clubs to BBC Radio were spinning their atmospheric bangers, which owe as much to Bach and Mozart as they do to Justice, evoking Air as much as Virtual Boy’s heroes-in-glitch Nosaj Thing and The Glitch Mob.

That stylishly oddball set of influences is what happens when two talented young classical musicians discover their shared passion for dusty vintage synthesizers, new electronic-music genres, classic formalwear, and girls that look like they are starring in a ‘60s Godard movie. Out of that distinctive crucible, Virtual Boy was born – the duo taking its distinctive moniker from a rare Nintendo game console gathering dust in a Southern California dorm room. Virtual Boy founders Henry Allen and Preston Walker met freshman year at Chapman University’s Conservatory of Music based in California’s famed Orange County. Henry arrived from his hometown of Albuquerque, NM to continue studying classical guitar (he recently won a national competition as part of the Chapman Conservatory Guitar Ensemble). Preston, a Southern California native, became part of the Chapman University Choir, which recently toured Italy where he sang for Pope Benedict XVI in the Sistine Chapel. But it was when Henry and Preston began composing together in their Music Technology class that their sonic potential revealed itself. Taught by notable Los Angeles electronic-music mainstay Steve Nalepa, the class featured a stream of all-star guest lecturers including Nosaj Thing, Lorn, Richard Devine, Adam Freeland and The Glitch Mob’s Boreta; these guests shared groundbreaking composition and performance techniques, all while exposing the students to the most innovative, cutting edge electronic music being made today - from dubstep and glitched-out funk to big-room bangers and beyond. Via this inspiration, Virtual Boy developed their own signature sound while producing their weekly composition assignments.

It’s safe to say that Allen and Walker received “A” grades in the class. What they didn’t expect were the accolades that started pouring in from the world outside academia’s ivory towers. As part of the class’ requirements, each student created a four-song EP, designed their own album art, and produced a multimedia concert performance for a record-release party at the end of the semester. Virtual Boy found their music finding new audiences before they could even complete their coursework, however. In May 2009, with a push from The Glitch Mob’s Boreta, Mary Anne Hobbs dedicated a segment of her influential BBC Radio 1 show to highlighting Allen and Walker’s Music Technology class: Hobbs even gave Virtual Boy a special shout-out, giving their standout track “Lost Treasure” pride of place in her set; as Hobbs’ show was the place where game-changing artists like Burial, Kode9 and Flying Lotus were discovered, this was very big news indeed. After esteemed San-Francisco based producer/rising DJ star Eprom heard Virtual Boy’s iconoclastic beats on Hobbs’ show, he began to champion their sound, dropping their songs in his sets and agreeing to master their tracks. Soon after, live/electronic music pioneers Sound Tribe Sector 9 quickly embraced the Virtual Boy groove: after hiring Allen and Walker to remix 1320 artist Nalepa’s “Sunflowers” single, STS9 were so impressed by the results they agreed to put out “How Long Does It Take To Get To Space?” As such, the EP’s title is starting to prove prophetic: it may take Virtual Boy a minute to hit the cosmosphere, but they might reach the top of their game much, much sooner.