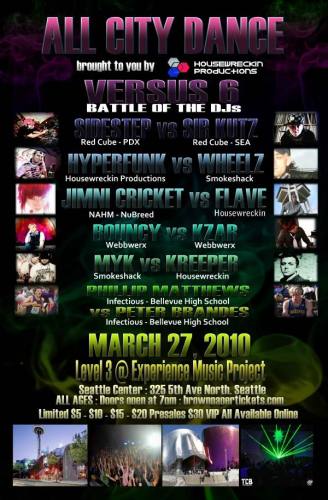 March 27th 2010
HOUSEWRECKIN
& TAP TAP
BRING BACK
the uber old school
BATTLE OF THE DJS
SERIES
VERSUS 6
BLACKLIGHT THEME
All Ages
FEATURING
SIDESTEP
Redcube - PDX
Paul Song was born and raised in Seoul Korea, and immigrated to the U.S. in 1993 at age of thirteen. As his family settled into their new home of Portland, Oregon; he set out to find his calling in the new and exciting city. And did he ever. Paul has since been responsible for a long list of accomplishments, but none as significant as the rise to his current status as Portlands premier breakbeat artist, Sidestep.
VS
SIR KUTZ
Redcube - SEA
After six years of musical endeavors and touring with several rock and punk bands, Julian Stephens; known now as Sir Kutz, has turned his attention to the EDM scene. Sir Kutz has shared the stage with a-list dj's/producers such as; Dj Icey, Diesel Boy, Reid Speed, Scissorkicks, Dj Craze, Factor E, Photek, The Freestylers, Capital J, R.A.W., Adam Freeland, Deepsky, Ctrl-Z, Hive, Screwface, The Incredible Melting Man, Simply Jeff, Ed209, Trona, Baby Anne, Bad Boy Bill, Dj Micro, Dj Mea, John B, General Midi, Tipper, and has even had Skibbadee MC over one of his sets in Vancover BC . He is constantly rocking his "three stylez" sound in clubs all over North America, Canada and recently made it over seas to Taiwan. Sir Kutz is a natural behind the turntables.
HYPERFUNK
USC Housewreckin Marble
VS
WHEELZ
Smokeshack Marble
JIMNI CRICKET
Nahm Nu Breed
Vs
DJ FLAVE
Housewrecin
BOUNCY
Webbwerx
VS
KZAR
Webbwerx
KREEPER
Housewreckin
VS
MYK
Smokeshack
PHILLIP MATTHEWS
Infectious
VS
PETER BRANDES
Infectious
MUCH MORE TBA
$5 Super Super Limited Presales
$10 Super Limited Presales
$15 Limited Presales
$20 GUARANTEED ENTRY PRESALE
$30 VIP ENTRY PRESALE
ALL AGES
@
Level 3
Experience Music Project
325 5th Avenue North
Seattle WA 98101
Notes
PRESALES Guarantee entry from 7-9pm
VIP gets you a Laminated Pass and guaranteed entry any time of night.
PHOTOS BY
TAP TAP
LASERS BY
SLICK LASERS
VISUALS BY
VJ MANEKI NEKO
About | Advertise | Contact | FAQs | Terms of Use | Privacy Policy | Accessibility Policy © 2022 - TheUntz.com. All rights reserved.