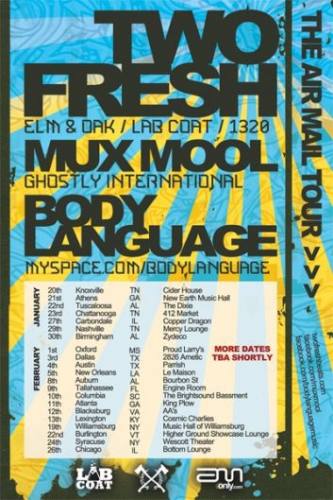 Two Fresh - Two Fresh consists of an inseparable pair of twin producers, Sherwyn and Kendrick Nichols, who have been making beats and playing music together since they were fifteen years old. Now about to be turning twenty-two, the twins are very excited for their releases to come in 2011. They’re productions are quintessentially hip hop but irresistably dancey. They put on truly engaging live performances where they are always accompanied by bandmate Colby Buckler on drums.

Mux Mool - This brooklyn native began his music production career in Minnesota with a cheap sampling keyboard and an interest in detuned sounds. A few years and more than a few keyboards later Mux Mool had honed his sound and broke through into the scene when his Lost and Found single for Moodgadget Records made it onto the Itunes’ Best of 2006 Electonic list. Mux Mool’s 2010 full-length debut, SKULLTASTE is a perfect example of his myriad of talents and influences.

Body Language - Self described innovators of the “Electrotropicalidiscodancingfun” genre, these four Brooklyn based collaborators make fun and jumpy yet smooth tracks with influences ranging from Chicago house to Detroit techno. They’re debut album, “Speaks,” Dropped in 2009 and they have since remixed Toro y Moi and Neon Indian as well as toured with Sia.