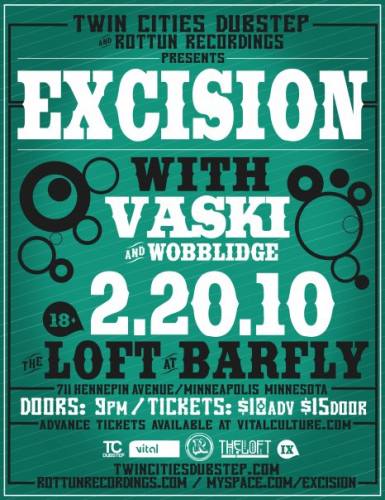 **THIS SHOW IS NOW ON SATURDAY 2/20/10. sorry for any inconvenience **
LIMITED $10 TICKETS ON SALE NOW AT:
LISTEN TO THIS MIX!
http://excision.crabdance.com/Excision_-_Shambhala_2009_Dubstep_Mix.mp3
http://www.myspace.com/excision
18+
Tickets: $10 advance $15 Door
Taking influence from DnB, Metal, and Hip Hop, Excision is a Dubstep artist who must be heard to fully believe. Combining the morphing bass lines of Drum and Bass, the aggressive energy of Metal, and the laid back vibes of hip hop, Excision’s style is incomparable.
At only 22, this young Canadian’s passion for music has already driven him to become one of the biggest Dubstep acts of North America. Anyone who has heard a set by this bad boy has walked away feeling energized and refreshed. If your lucky enough to catch a live set, expect an assault of bass heavy tracks, mixed quickly and seamlessly.
Upon the selling out and repressing of his first release, “No Escape” on his own label Rottun Recordings, it became apparent that there was a large demand for the dark side of Dubstep. This was proven to be true when Excision was asked by Electronic Music Superstars Pendulum to remix their latest single “Showdown.”
Look out for collaborations with North American Bass Guru Bassnectar, Pendulum, and many others ranging from DnB heavy weight SPL, to Dubstep womp master DZ. With an upcoming U.S. tour alongside Pendulum, and a set at the fabled Shambhala Music Festival among many other Canadian and U.S. dates throughout the year, Excision is one to watch.